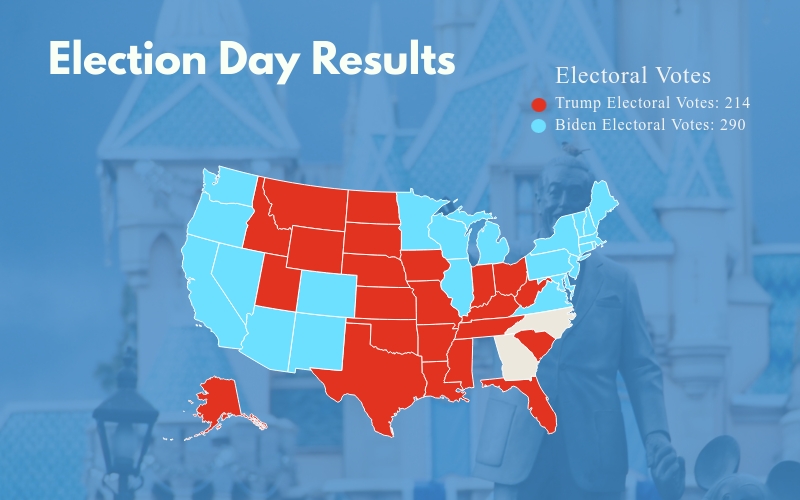 Above is a map depicting all 50 states and how they are voting. 2020 is one of the most controversial election years and as the votes roll in the map will be updated.

On Nov. 7, 2020, the election results were considered final according to the associated press. Joe Biden took an overwhelming lead in the matter of 24 hours, declaring him the next president of the United States. Kamala Harris will be his vice president and be the first woman, and African American in this position. Their inauguration will take place on Jan. 20, 2020 and he will become the 46 president of the United States.

Biden takes Pennsylvania and Nevada. He stands at 290 electoral votes.

Trump takes Texas and Montana. He stands at 213 electoral votes.

Trump takes Ohio and Iowa. He stands at 172 electoral votes.

Biden takes District of Columbia and Colorado. He stands at 131 electoral votes.

Biden takes Virginia and Vermont. He stands at 16 electoral votes.

The 2020 election is one of the most controversial elections in history. The voter turn-out for the election is projected to be the largest in over a century. Although this year voting has taken the form of mail-in ballots more than anything. Before Election Day over 90 million votes had already been cast and millions more citizens are expected to make their ways to the polls before they close. Political scientist believe that although most states ballots will be counted by the end of Election Day, some states results may take longer to receive and count. This means that the presidential results may not be released for days, or even weeks. That being said, as the results come in, the chart above will continuously be updated to reflect these results.