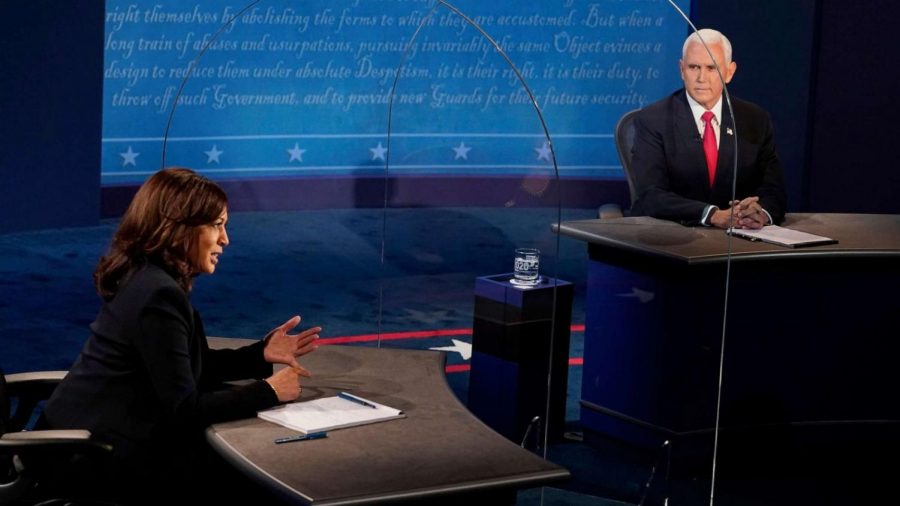 Senator Kamala Harris and Vice President Mike Pence on the debate stage. Both participants communicated how they plan to improve the lives of the American people.

The vice presidential debate between Vice President Mike Pence and Senator Kamala Harris was a highly anticipated event during this election year. Both candidates described what they would do to better the lives of the American people. Here is a variety of highlights and useful information that stood out from the rest of the Vice Presidential debate.

Senator Harris criticized the Trump administration’s handling of the coronavirus saying that they hid the truth from the American people, something that shouldn’t have been done according to Kamala Harris. Senator Harris also explained that if Joe Biden wins the election they will begin working on getting the vaccine ready and administering it, making sure that the vaccine would be free to all Americans. They would also work on improving the national strategy and testing.

“They knew what was happening and they didn’t tell you,” Senator Harris said.

Pence, on the other hand, defended the Trump administration’s coronavirus response and stated that one life lost was already too many, but the Trump administration’s mobilization to produce ventilators and other equipment for states was remarkable and that the travel ban that they ordered on China was criticized by Joe Biden for being xenophobic even though that very ban saved the lives of thousands of more Americans and gave them time to prepare medical equipment.

“Before there were more five cases in the United States, all people who had returned from China, President Donald Trump did what no other American President had ever done and that he suspended all travel from China, the second-largest economy in the world,” Pence said, “Now, Senator, Joe Biden opposed that decision, he said it was xenophobic and hysterical.”

Concerns over the presidential candidates’ ages

Pence along with Harris dodged this question. Pence went on to insult the Obama administration and Biden’s handling over the swine flu, stating that if the swine flu would have been as deadly as the coronavirus, two million Americans would’ve died by now. Harris then went on to respond with why Biden chose her stating that they have a purpose, that purpose being to lift the American people up during these difficult times.

Senator Kamala Harris attacked Trump in regards to only paying $750 in taxes this year, she went on to say that it is

important for the President to be transparent and that includes information about his health.

“He’s a businessman, a job creator who’s paid tens of millions of dollars in taxes. Payroll taxes, property taxes, he’s created tens of thousands of American jobs,” Pence said. “The President said those public reports aren’t accurate and the President’s also released literally stacks of financial disclosures the American people can review just as the law allows, but the distinction here Joe Biden 47 years of public service compared to President Donald Trump who brought all that experience 4 years ago and turned this economy around by cutting taxes and rolling back regulation.”

Harris explained how the Biden campaign is going to raise taxes on the top 1% and is going to help the worker, and make sure they are healthy. She stated that the Biden administration would invest in the people of the country and ensure that all people of all backgrounds would benefit from their policies.

Pence explained how the policies of the Biden campaign would harm the economy even more by eliminating crucial industries that employ millions of Americans, not only that but Pence exclaimed that the economy would go back to an economic surrender to China that would result in other thousands of jobs being lost and going to China.