“All In: The Fight For Democracy”: The Survival of Democracy Is On The Line This 2020 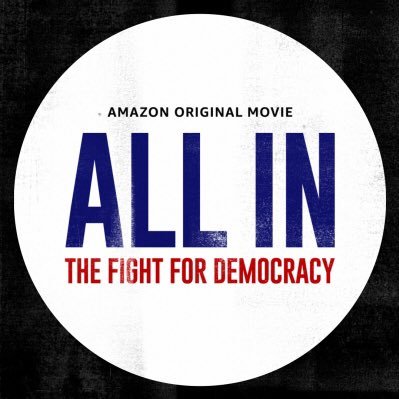 “All In: The Fight For Democracy” movie poster. This film was released September 18 and tackles the issue of voter suppression and where to go from here in order to preserve democracy.

The historic date of November 6, 2018, fills the dark screen. Election Day, the one that would determine the winner of the Governor’s race in Georgia. The race that would decide whether or not Stacey Abrams would become the first female African American governor in this nation’s history.

The TV speakers send out the sound of a crowd chanting “Stacey, Stacey, Stacey,” repeating the name of a woman who has signified hope for American democracy since the moment she decided to embark on this headlining race.

Stacey Abrams did not win, but she did not concede.

“To watch an elected official [Brian Kemp} who claims to represent the people and the state baldly pin his hopes for election on the suppression of the people’s democratic right to vote has been truly appalling,” Abrams stated when the results conclude her opponent, Brian Kemp, who is known for employing voter suppression tactics, had won the gubernatorial race.

This momentous event shed light on the intentional voter suppression tactics used in America and set the tone that pulsed throughout the entire film.

“All In: The Fight for Democracy” takes the intricacies of voter suppression and presents them in a digestible way that not only enlightens viewers but inspires them to take back their autonomy.

It all starts at the very beginning as social scientists break down the history of this prevalent issue.

“You cannot understand where we are right now unless you understand the history of voting rights and the struggle for voting rights,” said Carol Anderson, a historian and author of “One Person, No Vote,” who was featured throughout the film.

These experts speak on relevant events from the formation of our country when only white males who owned property could vote, to the present where exclusion is still largely at play. These stories are eye-opening as they break down the gains made, such as amending the constitution, and then describe how those gains were undermined with discriminatory policies which all work to bar minorities from voting.

Footage from the civil rights movement, including the march over Edmund Pettus Bridge, is shown in black and white, engulfing the viewer in true American history.

Each pinpointed event is approached with intention, as the speaker describes the cause and effect of each moment, whether it be the outcome of a court case, the true impact of a new law, or the consequences of regulations that subtly promote disenfranchisement. All of these facts are woven together and form a comprehensive picture of the true history of voting rights in America. The reality of it is jarring and the layout of the information fuels radical understanding.

Abrams shares her personal stories, depicting how much her family valued this right, knowing that it had been fought for with blood and bone to become possible for African Americans and other minority groups to vote.

Because of this, her family knew that they must take advantage of this right to have their voice heard. Abrams speaks of her grandmother and her emotional experience of voting for the first time. Her grandmother feared that having the right to vote was too good to be true, that exercising this right would end in violence, but she knew that she must use her right to vote because her community had sacrificed so much to obtain it.

Each recollection is accompanied by anecdotes from voters who have experienced oppression at the polls, having faced being turned away or simply unable to meet the requirements to use their right.

These stories force the viewer to become invested in this issue and the emotion of each account tugs at the heartstrings.

These facts paired with moving imagery unravels the viewers’ perception and allows them to grasp what has really been at play in the voting system of America.

This movie takes on the issue of voter suppression with no mercy but it also highlights the hope that lies in our democracy and in the people who make it.

Engaged citizens, young people and so many more who are a constant beacon of hope for America’s future are captured in their civic action. It creates a sense of community and togetherness as one, fighting for basic rights and true democracy.

Voter suppression in America is layered and this movie breaks it down with ease. This documentary has just the right amount of storytelling, history, and imagery that when it ends, it leaves the room and all who are in it buzzing with excitement and fueled by fire, ready to take action and ensure that everyone’s voice is heard in every election and in this country forever.

This powerful culmination of material concludes with the message that if we all vote, we can create the America we dream of.