America is in Great Need of a Rational Leader: Joe Biden

It is undeniable that the president elected this year should be one who will fortify the country from an economic, medical, and equitable standpoint. Ultimately, Joe Biden's values are the most promising when looking at what our country needs from a rational viewpoint. 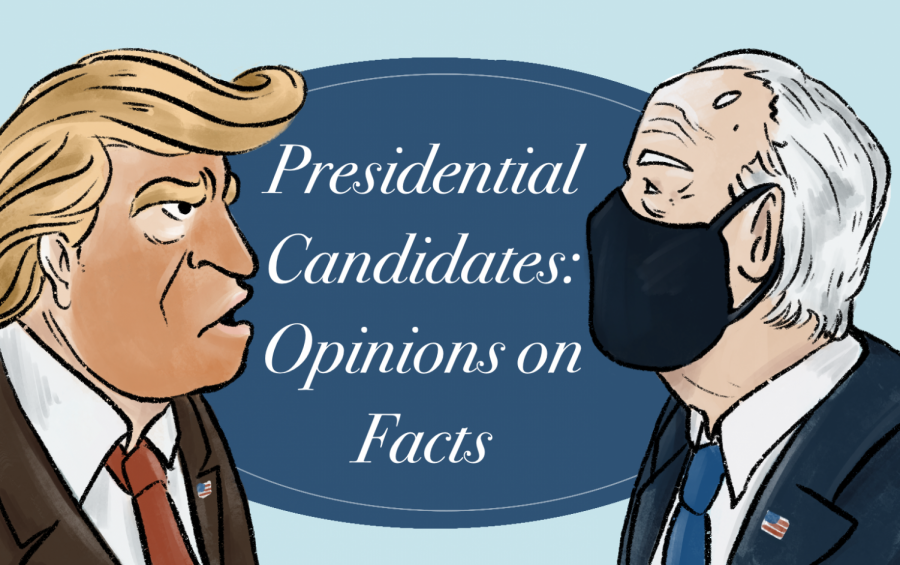 Donald Trump facing Joe Biden in the race to the Presidential Election on November 3rd. As voting beings, it’s important to know not just who, but what values and changes a vote is going toward. (Visual by Tiffany Leyva)

The presidential election is right around the corner and now more than ever, it’s important to have strong leadership in our country. This November, it’s vital that people know the facts about both candidates before they vote.

Now’s not the time to throw votes out willy-nilly. Now’s the time to look at both sides and respectfully separate facts from falsities in order to find out which presidential candidate fits their beliefs best.

That being said, my belief is that we need a leader who will play it safe during the pandemic. Since there are many key issues to talk about, the focus of debates will mainly be on COVID-19 response, criminal justice, and economy & trade. As we will see from both candidate’s responses, Joe Biden is more on the cautious side, while Donald Trump is more about getting things done quickly, and right now, we need someone who won’t rush into things.

Everyone wants things to go back to normal, but with COVID-19 still surging, normality is looking far off. Statistics prove that masks prevent the spread of the virus, but as seen, Trump has decided to let state governments enact mandates instead of enforcing a national one.

Biden believes that a national mask mandate would be more beneficial. “I would do everything possible to make it required to wear masks in public,” Biden said.

Criminal justice is a key issue that many people are split on. Amidst the recent racial tensions, the idea of “defunding the police” has been brought up on multiple occasions. While both candidates agree that the police should not be defunded, Biden’s plan is to shift current funding toward reforms and to spend $300 million a year on community-police initiatives.

Additionally, another issue that’s been brought up is qualified immunity for law enforcement, which ensures that they are protected from lawsuits unless there is evidence that proves there was an intentional violation of the law. While Trump strongly supports it, Biden would rather reform it than completely end it.

The combination of both the pandemic and the riots from protesting has affected the economy severely, and both candidates have plans to rebuild it. As we’ve seen, Trump’s plan involved a trillion-dollar one-time stimulus check toward local governments, businesses, and individuals, also supporting further stimulus measures and a payroll tax cut. Biden’s plan is to create new jobs in clean energy, manufacturing, and caregiving, and believes local governments and individuals will need more support from the federal government.

In terms of reopening the economy, Trump has encouraged reopening quickly in order to keep the economy going, while Biden believes that testing should increase before the economy can be safely reopened.

While both candidates believe what they’re going to do as president would benefit the US more, personally, I believe that Joe Biden will create more improvements than not. I am a person who prefers thought-out decisions over bold and daring ones, and as we can see, Biden’s stances on topics are geared towards caution and reevaluation, while Trump’s stances are, in my opinion, more rash and reckless. There are many key issues that the president will have to take on, and right now, a more sensible and careful president is what will help. Maybe in four years, when Biden’s term ends, things will have gotten better and we will no longer need a president who is methodical in their leadership, and that’s fine with me. I, like, every other American, just want what is best for our nation, and right now, I believe that is a cautious leader like Joe Biden.