Netflix Cancels Many Fan Favorite Shows Due to the Circumstances of the Pandemic. 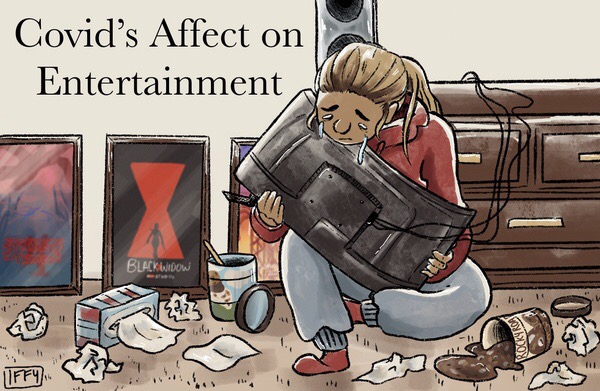 Netflix lovers are heartbroken due to the film production conflicts caused by the pandemic. The production of many shows has been postponed, and even put to a stop for many Netflix favorites. (Design courtesy of Tiffany Leyva)

2020 has definitely been one of the hardest years for the entertainment industry. Ever since March 13, all filming on big production studios has been postponed until further notice. While most studios are starting to re-open with the social distancing guidelines being followed, many shows have been completely canceled.

Many well-known shows, such as the Netflix originals The Society, Anne With An E, Fuller House,  and I Am Not Okay With This, have been permanently canceled. These shows had previously been renewed for more seasons but were changed upon current circumstances. Many fans are upset to see that many of their favorite shows will not be continued, as a result of the COVID-19 pandemic.

“We’re disappointed to have to make these decisions due to circumstances created by COVID,” Netflix said in a statement to Deadline in regards to the cancellation of The Society and I Am Not Okay With This.

However, the question is: Why are these shows being canceled rather than getting postponed until filming can reopen again? For many of these shows, everything was ready to go to start up filming again. The scripts were written and the sets were ready. However, the pandemic has brought on a great amount of fear and uncertainty regarding what could happen if they continued filming under these conditions.

TV shows require a good environment where people are guaranteed safety in their workplace. This would be difficult to conduct with so many people: the cast, camera crew, and extras—all working in the same confined environment. COVID-19 is a very transmittable virus, and even with multiple precautions, it’s still nearly inevitable that the virus would make its way onto set.

The Los Angeles Times explains that the number of extras is needed to be reduced, everyone off camera must wear a mask at all times, and COVID tests and temperature checks would be taken throughout the day. The precautions could add to the cost of film production, and if one person were to contract the virus, filming would be shut down immediately and bring on losing a great amount of money to stop everything.

Along with the fans, the show’s cast and crew are just as disappointed with the cancellation of their favorite shows.

“We have made this decision,” Keiser, the creator of The Society, states. “It was obviously pretty upsetting and abrupt.”

It’s very unfortunate to see these shows go so soon, but under the circumstances of the pandemic, it hasn’t been feasible or safe for the entertainment industry to continue producing various shows. This goes to show that the audience doesn’t always have the final say and control over whether or not a show continues its production.