CUSD Elementary Students Will Return to Campus on Sept. 28 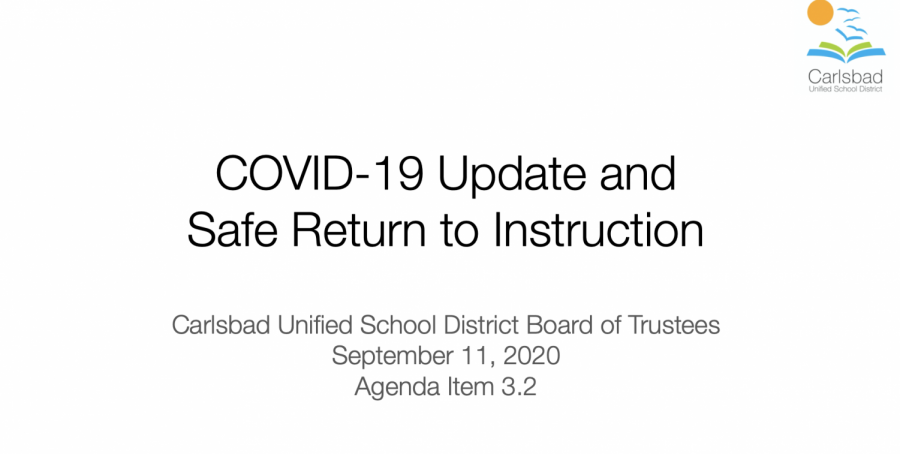 The CUSD board of trustees met on Sept. 11 to make their final elementary reopening decision. The goal was to find a plan that would be the best transition from online to at campus learning.

The Carlsbad Unified School District board members have the final say in how students return to school when (or if) they do.

The original Sept. 9 board meeting took place as planned. The board voted to reopen elementary schools on a high flex schedule, which would have allowed students to choose from three options: 1) attending 4 days a week 2) attending 2 days a week 3) conducting complete online learning, similar to the current distant learning. After this decision was finalized there was a flood of complaints by parents about this new schedule decision.

In response to the discontent over the decision, the board proceeded to plan an emergency board meeting to reevaluate. This meeting was held on Sept. 11 and a series of messages from CUSD parents were played explaining their concerns over the board’s Sept. 9 decision.

“Our student has settled in nicely with their teachers and classmates…we watched the board meeting…and were disappointed with the board’s deliberative process and decision. The board had the opportunity to make a decision that would’ve created stability and allowed families to plan for the future…instead the board voted for prolonged uncertainty,” (20:35) stated Brianna Corso and Esteban Donna, parents of two HOPE Elementary school students wrote.

Another parent of two elementary students, Scott Newman, had a similar approach to the proposed decision.

“Online learning is not productive for these ages, it’s unfair for the students and teachers to continue this model of recorded learning… loss of in-person instruction is handicapping our youth, the longer this continues the greater the impact will be. For the families that want to return, all avenues to get back to the classroom should be explored extensively.” (22:02).

After listening to the series of concerns the board discussed and decided to reconsider their vote from Sept. 9.

The two options on the table were the originally decided high flex schedule and the A/B hybrid schedule. The A/B hybrid schedule would mean 50 percent of students who decide to return to campus would attend in-person learning Monday and Tuesday while the second half would attend Thursday and Friday. This schedule was created over the summer by teachers and administrators. They believed that this would be the least disruptive to a student’s education and be the smoothest transition for a teachers curriculum.

Trustee Elisa Williamson and Trustee Ray Pearson, who originally voted for the high flex schedule immediately changed their decisions at the emergency board meeting held on Sept. 11.

“The goal is not to add more frustration, the goal is to retain stability, continuity, certainty and settle for your families and lower stress, not increase stress.” said Pearson.

In the end, the board voted 5/0 for the A/B hybrid schedule to be implemented, meaning elementary school students will go back to school starting the weeks of Sept. 28 and Oct. 5.

Trustee Claudine Jones concluded the meeting with one final statement.

“I don’t want to feel a false sense of security that just because we’re opening schools two days that the pandemic goes away, it’s still present, so I want to make sure that we acknowledge that.”