Learning and Growing: Girls and Boys Soccer is Hard to Beat 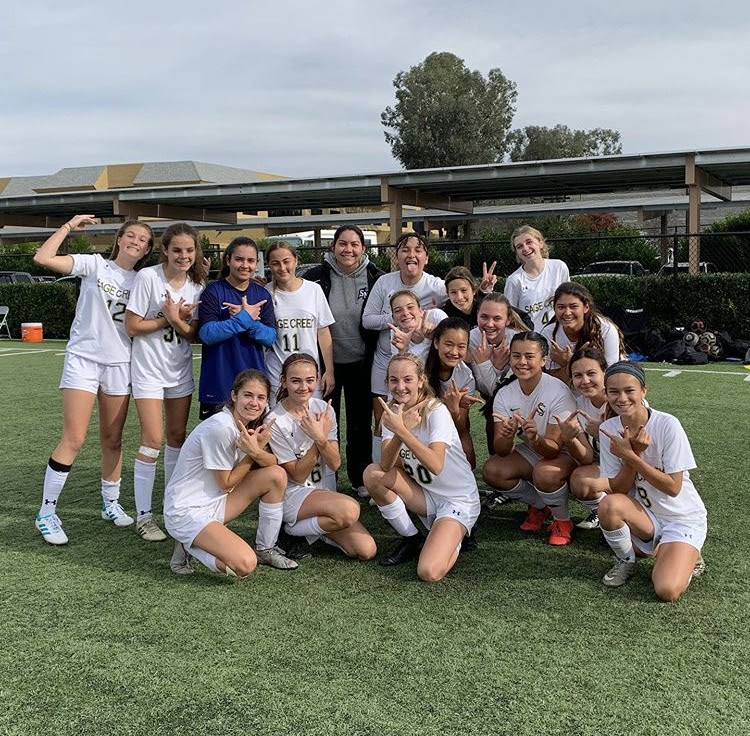 The Girls JV team poses after winning a game. The score was 2-1.

The boys and girls’ soccer team had an astonishing season scoring goals left and right. They have taken many wins for their teams, yet still had some losses. They have learned and grown as a team making both girls and boys JV and Varsity hard to beat.

“We won a lot of pre-season games and tied a lot in league but we still got some good wins,” stated girls JV player Makenna Burch.

The JV girls really bonded this season. From pouring rain and blasting music together, to playing their hardest at their games and making great plays to help them take the win. Girls varsity has also had a very successful season this year making it to CIF.

“We prepared for CIF by working on set pieces and possession. We also brought up four JV girls to make sure we have some fresh legs on the field,” girls’ varsity player Annabelle Allison said.

The girls’ varsity team has been working very hard this season. They took second place in their league game. The team has had a much better season than their previous year. The girls finished with eight wins and two draws. On the other side of the spectrum, the JV boys have also had a successful season.

“Our team was our communication, team chemistry, and playing with a system/style of play. Our team likes to play from the back which means the ball is passed from player to player until defense is converted into attack,” JV player Jared Espinoza shared.

The boys’ JV team won two games this season. They learned and developed new skills while understanding the importance of a serious practice environment, taking training very seriously. Sometimes they were their own enemies by not employing enough aggression or missing simple tackles. But in the end, the team was very energetic, hardworking, and productive.

“We lost a lot of games but we won a few like beating Oceanside which was huge,” varsity player Leo Zizzo stated.

The varsity team played hard this season. They didn’t make it to CIF but they bonded together throughout the season by blasting music in the team room to get hyped before games. They hope to make it to CIF next soccer season.

“Overall, the season was great and I enjoyed every second of playing for Sage Creek,” JV player Jared Espinoza said.