Chromebook Program One Year In: How’s it Going? 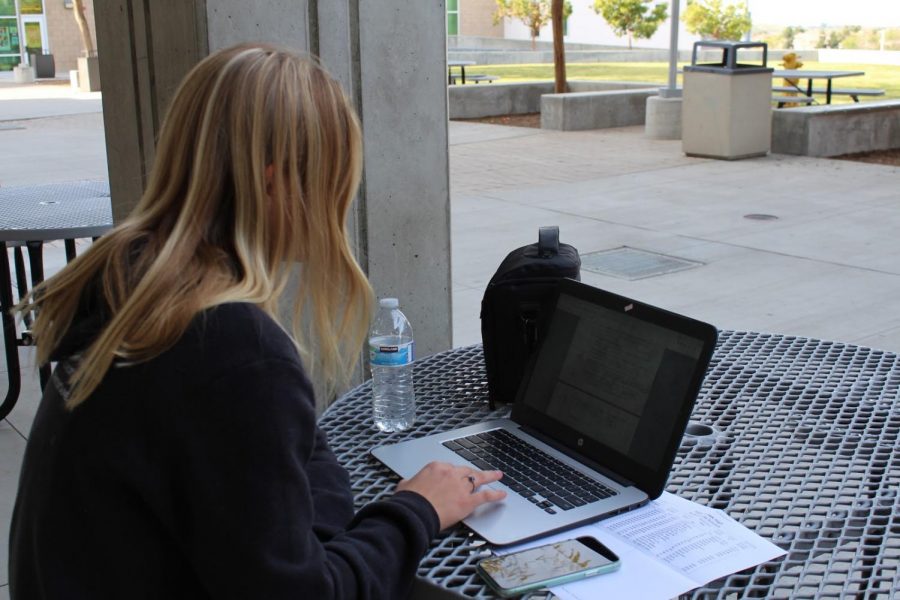 Junior Sophia Vanslyke works diligently on her chromebook during her first period off-role. Because the devices were issued out to each individual, students can now use their Chromebooks outside of class.

Sounds of clicking and clacking on keyboards resonate from each desk in a classroom full of students. They are the only sounds in the focused environment, and the typing causing it only stops once the bell rings. When the students hear the bell signaling they can travel to their next class, they slip the device into their bags and head on their way.

Although students use them with ease, the Chromebooks have not always been such a prevalent presence in the classrooms at Sage Creek high school. In fact, the graduating classes of 2021 and 2020 only received the district-issued devices this school year.

With the addition of the district-issued Chromebooks to our campus came many changes. Junior Issac Perez spoke of his views on the Chromebooks.

“Overall, I think it’s a benefit. [The chromebooks] make classes a lot smoother and now you don’t have the awkward transitions between walking over to grab a Chromebook [from the chromecart], then going back and plugging it in,” Perez says. “You just grab your Chromebook and get to use it whenever,”.

Before this year’s district-issued Chromebook program, chrome carts were used throughout the school. However, not every classroom could have a Chromecart every day, meaning there was only class-wide technology use at certain times in the week. Biology teacher Courtney Goode elaborates on how impactful this particular change has been.

“As a teacher, they’ve really opened up what I can do, especially when I wake up and one of my sons is sick. To just push a sub plan to Google Classroom and know that everyone has access to it is super exciting,” Goode said. “Having that accessibility to technology has been huge,”.

The Chromebooks also help many students stay on track. Senior Rachel Coval spoke about the Chromebooks’ effect on productivity.

“It definitely helps you at school because you can usually connect to the wifi and [the chromebooks] are pretty fast… and it’s really efficient to get work done,” Coval said. “You have everything like the Google Drive and Google Docs all in one place and it also makes things a lot easier,”.

Junior Paola Gonzalez agreed as she spoke about the benefits she has seen from the addition of the Chromebooks.

“I feel like I’m more productive with them,” Gonzalez said. “I don’t procrastinate as much because I’ll have [the chromebook] there with me and it’s never ‘Oh I have to go home and do it;’ I can just do it here,”.

One of the prime reasons for the district-issued Chromebooks was to provide more students with access to technology at home, so everyone can work on assignments digitally. Senior Wesley Estes states this as part of his reasoning for his opinion on the devices.

“I have my own laptop… at home personally, but I [know] for a lot of kids who maybe don’t have a laptop, it does help,” Estes said. “So I’d say it’s a good thing we have school-issued Chromebooks,”

“I believe it provides them with an opportunity to be responsible for something,” Porter said. “They aren’t expensive but they aren’t cheap, so [the students] have to learn to take care of these things because most likely they’ll have a device when they’re an adult, so they will have to learn both responsibility for it and how to use it responsibly,”

Goode also spoke about the extra responsibility placed onto students with the Chromebooks.

“I know that some [students] are not a fan because it’s an added responsibility that some don’t want. I have definitely seen some trashed Chromebooks so I know that that’s a concern.” Goode said. “Maybe some students know that they maybe aren’t ready for that kind of responsibility. To carry it around in your backpack every day [means] it undergoes a lot of wear-and-tear, so I’m curious to see how long they last for and how often we have to buy new ones,”

Surprising to many, the number of students that have needed new Chromebooks due to negligence is relatively low, with only around 6 this year according to Tech Aide Ronisue Player. However, there are more students that break screens with a common explanation being along the lines of “I don’t know what happened,” Player said.

Another fact that comes with anything mandatorily issued is the problem of forgetting one’s Chromebook at home. Interestingly, there seems to be trends in how many people need to check out a Chromebook for the day.

According to this years’ statistics on the checking out and issues with Chromebooks, the lowest rates of people checking out Chromebooks for a day occurred from Sept. to Nov., after which a spike happened and in Dec. and Jan. the rates became up to double that from the previous months.

“It would help if [to] remind students to keep some charge on their Chromebooks,” Player typed.

At the end of the day, it seems that the students and teachers of Sage Creek view the district-issued Chromebooks in a positive light, especially in comparison to what working was like before them.

“When the Chromebooks first became a thing I really thought I wasn’t going to like them, but now I really like them,” Coval said.