Gavin Graff and Collin Johnson both receive their scholarships after coaching the season. The scholarships were given in light of their leadership to the team.

Being a student-athlete can be a lot of work – especially when you are coaching a youth sports team. In this case, Gavin Graff and Collin Johnson have a lot on their plate.

Over the summer, the two coached at The Carlsbad Youth Baseball League.  It is a baseball program here in Carlsbad that gives kids from the age of four to 14, the opportunity to expand their knowledge on the sport.  Both Graff and Johnson had something extra special to add to their teams, both of them ran their practices like one at Sage Creek. This experience changed the season for the young players because they got to see what a high school practice entails. 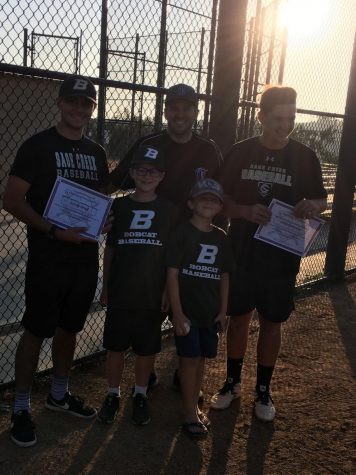 Photo courtesy of Ryan MadsenGavin Graff and Collin Johnson both receive their scholarships after coaching the season. The scholarships were given in light of their leadership to the team.

We sat down with senior Gavin Graff to talk about his involvement with the Carlsbad Youth Baseball League.

“I decided to coach my own youth team because I wanted to pass on my 12 years of experience playing baseball for the Next Generation of kids,” stated Graff.

Graff is a part of the varsity baseball team, and has been involved with this program for 3 years. His kindness and love for the game created a fun learning environment for his team.  When we asked him where he got such a great opportunity he had only one thing to say.

“Coach Guy Sabala which is the varsity pitching coach, asked me if I was interested in coaching a team because this year there was a lack of parent [dad] volunteers that were willing to head coach,” added Graff.

Not only did coach Guy Sabala give Graff this opportunity, but he also reached out to sophomore Collin Johnson to offer him the same position. Both are very grateful for Coach Sabala and everything he has given them. Johnson also commented on his favorite part of coaching.

“Seeing the kids do really well in the games and it felt really good to see them improve their performance,” added Johnson.

Both Graff and Johnson then mentioned that being coaches helped them both on and off the field.

“It helped me become a better athlete because it showed a different perspective and I learned more from coaching…that has caused me to respect coaches more,” stated Johnson. 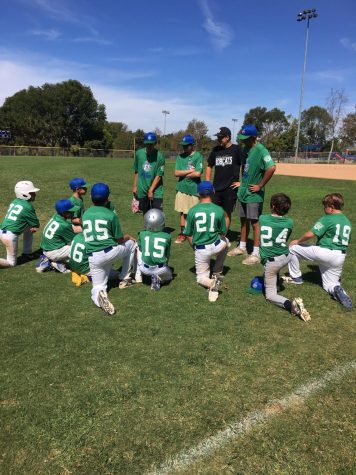 Photo courtesy of Ryan MadsenCoach Collin Johnson takes a knee with his team he mentors. Johnson strives to teach the youth the best he can.

“This experience I’ve had will allow me to find errors in my own play more easily,” added Graff.

Carlsbad Youth Baseball League has made a huge impact on both their lives. It gave a new perspective of coaching and an unexpected scholarship.

“I think the scholarships are $500 towards any college and you can use it to chip in for funds. It was truly an honor to be able to receive that and I didn’t expect to get anything at all,” stated Johnson.

Lastly, we talked with Coach Madsen about his thoughts on these players and what they were doing in the community.

“I’m just proud to see our players get excited about the opportunity to help other younger baseball players… and an extra thanks to Coach Guy Sabala for giving these guys this opportunity,” added Madsen.

Both Graff and Johnson made lifelong memories and this has impacted their lives as players and as people.