The Importance of Young Votes

Persons between the age of 14 and 16 hold up signs encouraging the legal voting age to be dropped to the age of 16. Though this protest occurred across waters in London, this state of mind is held among young people globally.

With 2020 only a few months away, the seniors of Sage Creek will soon be voting for the next president. However, due to common factors like confusion and disinterest, many young people tend to not actively participate when it comes to both presidential and midterm elections.

Photo Taken From CalTimesPersons between the age of 14 and 16 hold up signs encouraging the legal voting age to be dropped to the age of 16. Though this protest occurred across waters in London, this state of mind is held among young people globally.

At Sage Creek, though there are many who are passionate about voting, there are plenty of others who are not quite sure. Senior Sana Poustinchi is one of the students who firmly believes in voting. When asked why she believes young people might not be so inclined to vote, Poustinchi stated a number of reasons.

“It might be because they think their vote doesn’t matter, because they don’t care about politics, or … they don’t want to… go into the polling place and wait thirty minutes to vote.”

Poustinchi’s point about many young people not thinking that their vote will matter is shared by others, such as senior Wiley Waggoner.

“I think a lot of young people don’t vote because they might be more cynical that their vote doesn’t matter as much,” Waggoner says.

He also goes on to talk about how some people do not vote because they are simply not in the loop, which is a major issue.

“They just don’t fully understand the issues that are being debated.”

The flip side of this lack of understanding often found in young voters is while they do vote, their vote may or may not truly reflect what they support. Senior Brenna Kelley believes this a very common occurrence when it comes to voting among her peers. 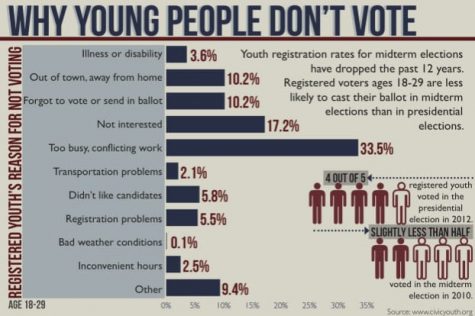 Photo Taken From Civic YouthThis image depicts the statistics behind teens’ reasons for not voting. By looking into this information, we can find an efficient way to increase votes in young people.

“A lot of people just go to the ballots and read names and they’re like ‘Oh I don’t know who that is but they’re in my party so I’m gonna vote for them.’”

Because of the low amount of voting found in younger (eligible) age groups, measures have been taken to raise voting turnout among this demographic. Even celebrities like Taylor Swift and Ryan Reynolds encouraged their fans to vote in the 2018 midterms.

“You know, their voice is important,” said Bloomquist.

“I think if you have enough young people rallying around a cause, a person, a candidate, I think it’s important for the older generation to hear their voice.”