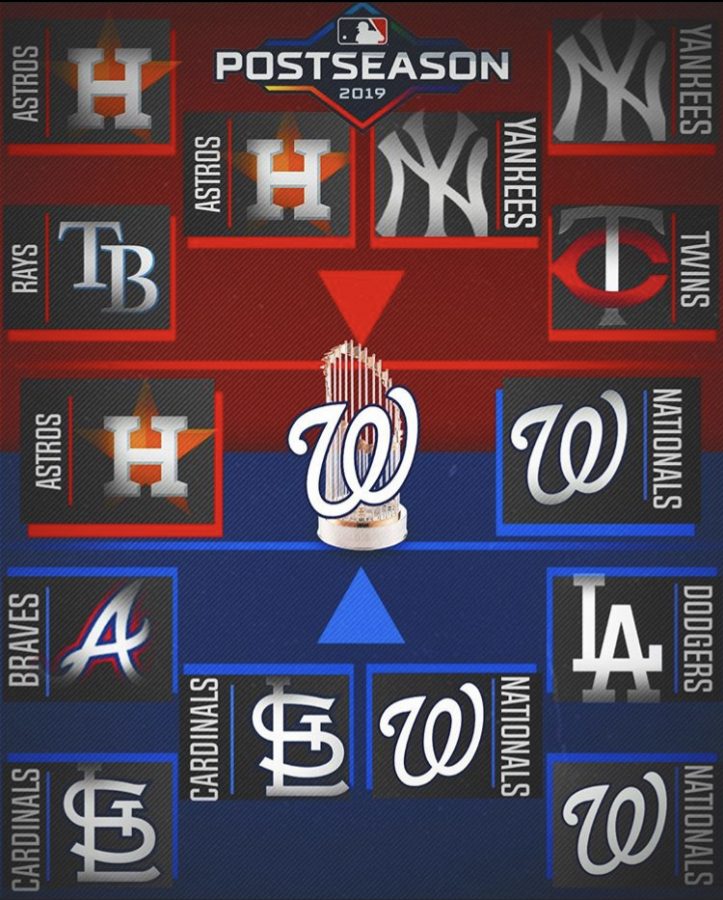 Another exhilarating MLB playoffs have come to a close, leaving every baseball fan’s prediction bracket in pieces. This year’s postseason included appearances from the Tampa Bay Rays, Oakland Athletics, Minnesota Twins, New York Yankees, Houston Astros, Milwaukee Brewers, Washington Nationals, Los Angeles Dodgers, Atlanta Braves and the St. Louis Cardinals. The playoffs started with the American and National League’s Wild Card games. This is a single-elimination game for two teams that did not win their division. The Wild Card winners move on to play the number one seed in their league.

NLWC: The Washington Nationals faced the Milwaukee Brewers with the first game quite possibly being the most exciting. The Brewers quickly jumped on Nationals ace pitcher Max Scherzer with home runs from Brewer’s catcher Yasmani Grandal and first basemen Eric Thames. The Nats inched closer with a home run from their shortstop, Trea Turner. Jumping into the bottom of the eighth inning, the Nats sent up the young outfielder Juan Soto to the plate with the bases loaded. Soto laced a single into the outfield getting past the Brewers right fielder Grisham and scoring all three runs, giving the Nats the lead. Nationals closing pitcher Daniel Hudson got the save, sending the Nats onto the NLDS to play the Dodgers.

ALWC: The Tampa Bay Rays battled with the Oakland Athletics. Yandy Díaz started the game off with a home run in the first inning and then hit another in his second at-bat. Home runs from Avisaíl García and Tommy Pham led Tamba Bay to a 5-1 win over the A’s, sending them to the American League Division Series against the Houston Astros.

ALDS (Yankees vs Twins): Two of the most powerful teams, the New York Yankees and the Minnesota Twins went head to head which, shocked many fans when the Yankees swept the Twins in three games. The Bronx Bombers erupted with great performances from Gleyber Torres and DJ LeMahieu as well as great pitching all around.

ALDS (Astros vs Tampa Bay): The Houston Astros, the team with the best record in this year’s regular season, faced the Wild Card winners, the Tampa Bay Rays. The Astros easily won the first two games, but the Rays fired back with wins in the next two games. The Astros sent up Gerrit Cole, arguably the best pitcher this year, in the deciding game five. Cole added to his resumé with a stellar outing sending the Astros to face the Yankees in the ALCS.

NLDS (Dodgers vs Nationals): The best team in the National League this year, the Los Angeles Dodgers, faced the Wild Card winner, the Washington Nationals. The series went back and forth with the Dodgers winning game one and three and the Nationals winning two and four. In the deciding game five, Howie Kendrick’s go-ahead grand slam gave the Nats the lead and eventually sent them to the next round.

NLDS (Braves vs Cardinals): In the final Division series, the Cardinals battled the Braves for all five games. The Cardinals won games one and four while the Braves won two and three. In game five, the Cardinals pulled off the unthinkable when they scored a record-setting 10 runs in the first inning. The Cards went on to win the game and advance to the NLCS against the Nationals.

ALCS: Yankees versus the Astros. The series every baseball fan anticipated. Every prediction for the season became reality as this series blasted off with a 7-0 win for the Yankees in game one where Gleyber Torres had five RBI’s. Astros went on to win the next three games with great pitching performances from Justin Verlander, Gerrit Cole and the Astros bullpen as well as clutch hitting from Carlos Correa, George Springer and José Altuve. This put the Yanks in a do-or-die situation for game four where they eventually took that game with home runs for DJ LeMahieu and Aaron Hicks. The Astros kept a solid lead throughout game six until the Yankees down their last out LeMahieu hit a game-tying two-run shot keeping the Yankees season alive. Despite the late rally for the Yanks, in the bottom of the ninth, Altuve crushed a walk off two-run home run sending the Astros to the World Series. Altuve earned the MVP award for the series because of his game-winning home run and his other clutch moments in the series.

NLCS: The Nationals kept their winning streak rolling with a series sweep over the Cardinals. National hitters, Juan Soto, Anthony Rendon and Howie Kendrick performed very well but the secret to the Nationals success in this series was their pitching. Pitchers, Max Scherzer, Stephen Strasburg, and Anibal Sanchez all came close to a no-hitter, silencing the Cardinals bats throughout the series. Howie Kendrick was awarded the MVP award for the series due to his consistency at the plate in every game of the series.

World Series: In their second World Series in three years, the Astros faced the Nationals who played in their first ever fall classic. A series for the ages began with two wins from the Nationals in Houston winning 5-4 and 12-3. Games three-five were played in Washington where the Astros rebounded by winning all three games with scores of 4-1, 8-1 and 7-1. Games six and seven were sent back to Houston. In game six, the Nationals kept their season alive with a 7-2 win and a great pitching performance from Stephen Strasburg. The Nationals bats kept it rolling on the road, winning the deciding game seven, 6-2. The Washington Nationals are now your 2019 World Series Champions. Stephen Strasburg was named the World Series MVP and this series marked the first time all seven games were won by the road team.