You Signed the Syllabus… 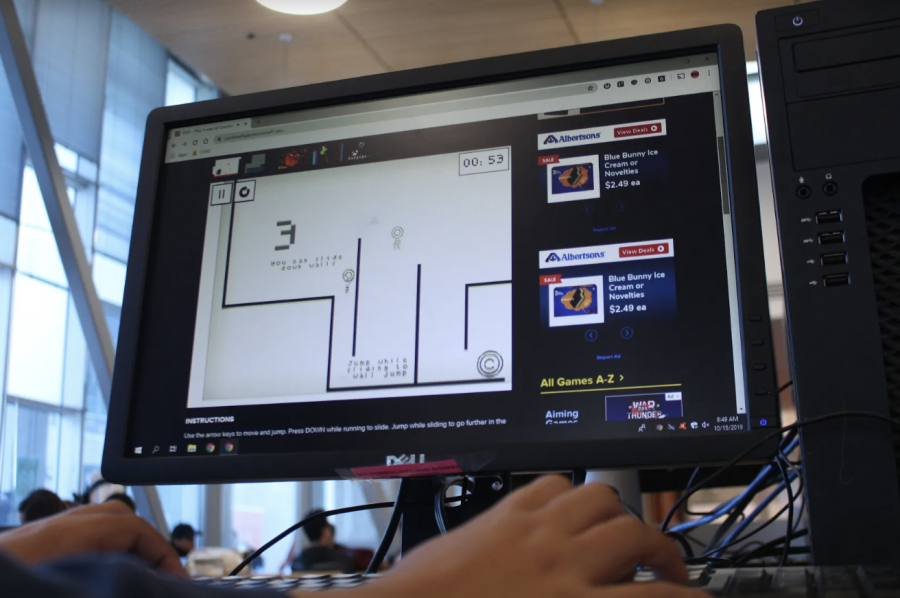 Student Quinn Collelo playing on “Cool Math Games”. Although cited as a “brain-training site”, students abuse playing on this website during class.

If you walk into the library, you would expect to find students reading and studying. Though that’s not always what you will find.

If a student looks into the files of nearly any computer and they will see at least one game. The most common is Roblox, which students will spend the entire lunch period playing. The librarian Cathy Asker goes through the efforts of trying to get students to stop downloading files (games).

This may be considered an issue, but when students signed the school syllabus, they agreed to refrain from downloading files on school technology. The rules have already been put into place, Asker is just doubled with the task of enforcing them.

“Since they agreed to that, I need to enforce that. It’s district policy and also school policy,” Asker explained.

While she doesn’t allow downloading games, she still supports the idea of gaming. Students are allowed to play games on the computer as long as items don’t get downloaded.

“I’m okay with students gaming on [the computers], but I can’t have the computers stop working because it’s so full.” She said.

This brings up another issue. When items get downloaded on to the computers, their storage is decreased. With this, comes the danger of viruses. Students aren’t always concerned about the health of the computers, and the computers do not possess anti-virus software. Therefore, computers are unable to protect themselves.

“It takes a lot of time and energy back up and running after a virus has disabled it,” said Asker. This is a huge problem because the school needs to have computers available for student use.

To get all angles of the story, one of the freshman students informed us about how he felt about these rules.

“It kinda sucks that I can’t play games anymore or make them,” said Aiden Marsh.

Aiden is one of the students who played games every day, while he didn’t download games he still enjoyed playing them. In Roblox, you are able to make games and that was something he would do. Now that Asker is putting her foot down, he will have to find something new to occupy his time.

While the current students are engaging in this misconduct, they aren’t the start. Ever since the school opened, the issue of students downloading games on school computers has been present. Although it was to be expected, high school students will do lots of different activities to cure their boredom.

“The day the students showed up is the day it started,” Asker stated.

In 2013, when the school opened the computers were introduced to the horrors of downloading games. The librarians have been responsible for taking care of these computers since the beginning.

In order to stop students from downloading games and being distracted from their work, the school has made our Chromebooks unable to perform hardly anything. This guarantees the safety of the student body and technology.

Another student said that they believe the rules are adequate. Although, only being able to play CoolMathGames can sometimes get boring.

“I think that it could be fun to have a couple games downloaded.” Said Quinn Collelo. He wishes to be able to have a few school approved downloaded games on the computers to play during lunch.

“I want to encourage the administration to continue allowing games to be played, I just hope that sooner or later students get the idea that downloading stuff shouldn’t be acceptable in an educational setting,” Asker stated.