Turkey’s Attack on the Kurds 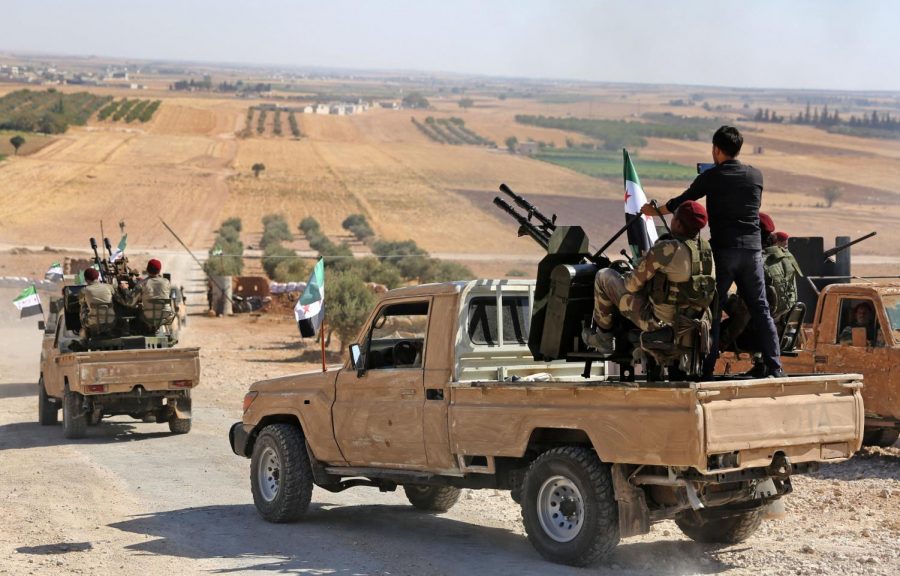 Syrian Rebels ride into the Syrian-Turkish border, backed by Turkey. On Oct. 9, Turkish Troops moved past the border into Syria.

Turkey has taken drastic actions with the use of airstrikes and artillery barrages against Syria. The attacks are aimed at Kurdish forces, that have, up until now, been reinforced by U.S. troops for the past several years. On Sunday, Oct. 6, U.S. troops abandoned their posts in Syria abiding by President Trump’s orders.

Trump’s decision to retreat in Syria was sparked because he felt that too many American lives had been lost by protecting this region and that Syria was a designated “constant war zone”. The Kurdish forces view Trump’s decision as a stab in the back and refrain from mentioning the U.S in any of their recent media appearances.
Turkey’s actions are said to have been a result of a conversation between President Donald Trump and Turkey’s President, Recep Tayyip Erdogan.

“Turks claim Trump handed over leadership of the campaign against ISIS in Syria to Ankara” (The Guardian).

Although, the war also seems to inhibit an ongoing controversy between Syria and Turkey due to their history of disagreement over power dynamics, which causes them to have different interests. Plus, taking the situation to a level of higher complexity, America is an ally of both Turkey and the Syrian Democratic Forces, which makes it difficult to intervene.

At this point in time, Trump seems to be disregarding the current circumstances which have led to negative outbreaks.

“America’s attitude will create a negative impact on the whole region… this American decision will destroy all the advances, particularly with regards to security,” Amjed Osman, a spokesperson for the Syrian Democratic Council

Trump’s decision has been receiving criticism from both political parties and came as a surprise to many. “The American troop withdrawal came in stark contrast to his statements last year where he vowed to stand with the Kurds because of their assistance in the war against Islamic State Terrorism” (AP News). Kurdish troops were supplied with U.S. weaponry and supported by the U.S. while fighting ISIS.

When receiving word about the invasion from Erdogan, Trump made it clear that America is against the attacks, saying, “The United States does not endorse this attack and has made it clear to Turkey that this operation is a bad idea.”

“This loss of Syrian land will allow thousands of ISIS prisoners to be set free, allowing an almost destroyed Islamic State Group to rise back into power” (AP News).