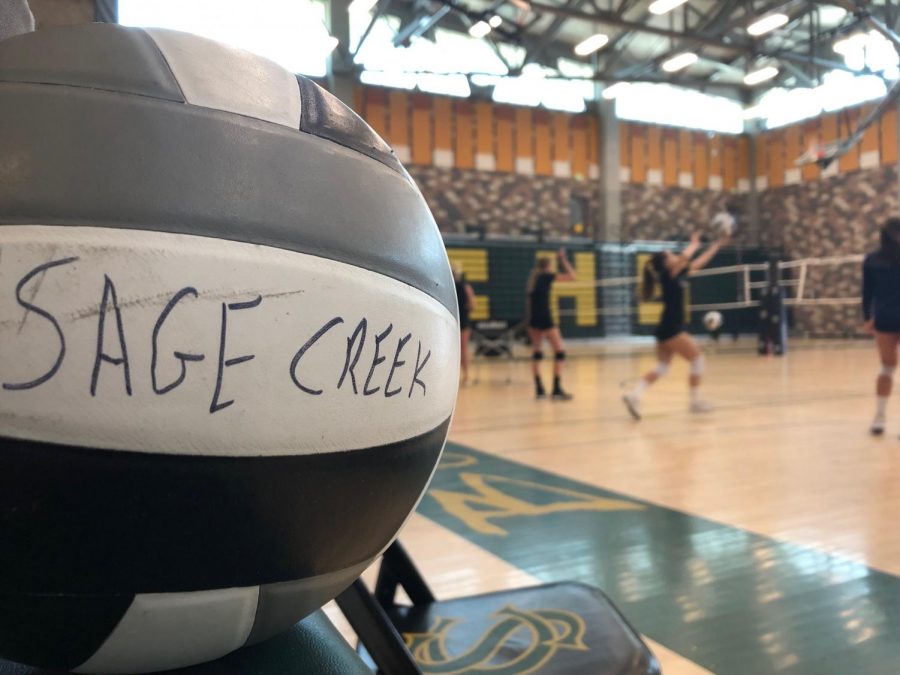 Varsity girls volleyball practices their serving in order to get ready for their game on Monday, Sept. 23. They practiced on Friday, Sept. 20.

As the new school year begins, so do new challenges and a new season for varsity girls volleyball.

With last season’s performance at the CIF (California Interscholastic Federation) playoffs, girls volleyball won the division 2 championship and brought back yet another banner for Sage Creek.

With this win, more attention has started to come to the program. With all of this excitement and awareness, the varsity girls volleyball program have moved up a division where the competition is more fierce.

Senior Hanna Karl says that she is “really excited” for the upcoming season and even though their preseason was “challenging,” she believes that it will “ultimately benefit the team, especially for league.”

Although the team is already skilled, there is always room for improvement, especially due to their recent change in division rank.

The team has been successful in the past and hopes to keep its momentum for the future of the program. Both Delaney and Hanna believe that the team can be as successful this year as they were last year.

“I think we can be very successful in league, even though we [graduated] a lot of seniors last year, we still have a solid team,” Delaney states.

With a new season, the team lost some players and gained some players. One of these new players is sophomore Brooke DeGraan who had previously played on the junior varsity team as a freshman.

“The team chemistry is a lot better and we are like a family,” DeGraan says, because of this, she feels that she will be able to improve faster because of this new comfortability.

Even though the team has lost some seniors and moved up a division into a more aggressive league, the players are still ready to perform at the highest level they can.

Delaney adds, “we have a lot of heart, we all love each other and we are a solid team.”