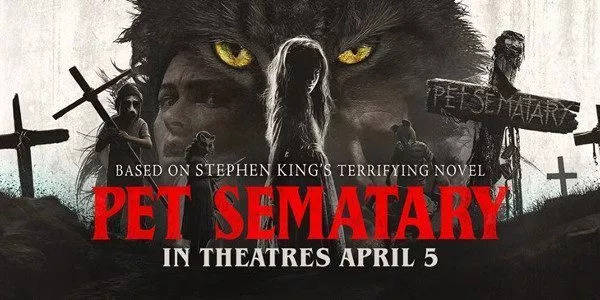 Photo taken from Not too Much Podcast

Ellie (Jeté Laurence) stands center frame with her cat, Church, behind her. This serves as the cover for the film.

“Pet Sematary” is the latest Stephen King movie adaptation. With previous adaptations like “The Shining” and “It” making hundreds of millions at the box offices, it wouldn’t be long before another Stephen King Novel was given a shot on the silver screen.

Pet Sematary tells the story of Mother and Father, Louis Creed and Rachel Creed, played by Jason Clarke and Amy Seimetz, who move themselves and their two children Ellie and Gage from Boston to the fictional rural town of Ludlow, Maine.

As Rachel and Ellie begin unpacking some boxes, they start to hear some ritual drum beats radiating from just outside the treeline from their backyard. When the two go to investigate, they find children with animal masks wheelbarrowing what seems like a dead dog and presumed pet of one of the children.

Later on, Ellie decides to explore by herself where she discovers a pet cemetery on the outskirts of their property where she meets their friendly neighbor, Jud Crandall, played by John Lithgow, who has lived in the same house his whole life.

Then, Halloween night comes and Jud alerts Louis that Ellie’s beloved cat Church has been hit by a truck on the road just outside their house. Feeling bad for Ellie, Jud takes Louis to the pet cemetery and buries Church. The next day, Church magically appears back home with Ellie but seems off as he starts to scratch the members of the family as he was previously a very affectionate cat.

Fast forward to Ellie’s ninth birthday party and she just like Church, meets her demise head-on with another speeding truck. Saddened by the event, Rachel takes Gage back to Boston after Ellie’s funeral for a couple of days leaving Louis alone for no apparent reason.

During this time alone, however, Louis digs up his late daughter and re-buries her in the pet cemetery in hopes that it too will indeed bring her back, which indeed it does but just like Church, Ellie comes back differently. While her body is now alive, her personality is dead. She has almost no emotion to her voice and the times that she does show emotion, it’s anger.

“Pet Sematary,” while it was entertaining, was not up to par with any previous Steven King movie adaptations. It mostly relied on jump scares to get the audience scared. There was no real character development aside from the mother who had flashbacks to when she was a kid and indirectly killed her older sister who hated her because she didn’t have “twisted back.”

In “It” you are able to feel sad after Georgie’s death in the first five minutes in the film. This is because while character development was short, you could see not only the relationship Bill and Georgie have but also their personalities as Bill taught Georgie how to make a paper boat. Small things like this can make a huge difference in the emotion the audience feels when tragic moments occur.

The writing itself wasn’t the best either. It seemed very lazy that the only reason as to why the pet cemetery could bring dead things back to life was because the ground was “bad.” Really? Is that all the screenwriters can come up with. This story for this movie has the padding of a mattress and the depth of a sheet.

In the end, do I recommend this movie? Yes, yes I do. Despite the lack of character development, meaningful story and lack of creativity whilst trying to scare the audience. “Pet Sematary” was a very enjoyable film as the special effects and acting by the cast members where superb.

Editor’s note: The original version of this article listed the brother’s name as “Gabe.” This name was changed to “Gage” to reflect the correct information.