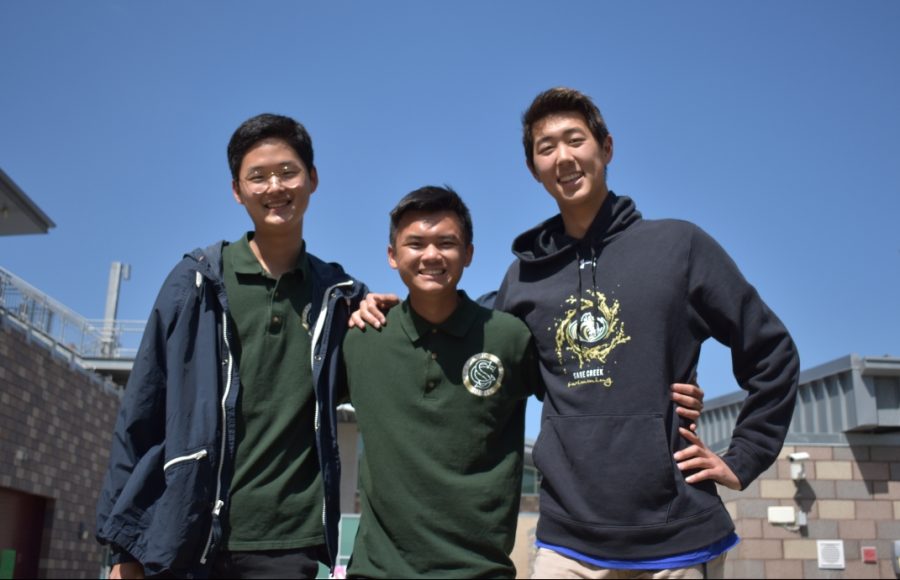 All three academic achievers have been close friends since the start of high school. This achievement has only brought them closer together.

The Sage is pleased to announce the class of 2019 Valedictorian as Preston Cheng and Co-Salutatorians as Kenneth (Kenny) Nguyen and Han (Andy) Goh. This decision is a long process that takes into consideration your Grade Point Average (GPA), the rigor and the number of community college classes taken.
Who is the Valedictorian?

Preston Cheng has been working his hard these past four years at Sage Creek but also does a lot outside of the classroom.

“I swim. A lot. I love to get food and hang out with my friends. On the side I also lifeguard, tutor, am the swim team captain and am a CUSD Champion. It’s also funny because I have a little three-year-old brother who’s very noisy and distracting. He’s always trying to get me to play with him, so I’ve had to learn to study through his crying or his curious face popping into my room asking me what I’m doing.”

In the future, Cheng will be studying computer science and as of now, has committed to UCLA. After college, he says his biggest desire is to help people and has political, possibly even presidential, aspirations.
Who are the Co-Salutatorians?

The selection committee came to the conclusion that no one of these two could be put above the other based on their distinct differences.

Nguyen has been on varsity tennis for all four years and varsity Academic league for the past three.

Nguyen will be attending UCSD for data science. He intends to become a data analyst, specifically focusing on biotechnology and biomedical firms, potentially San Diego based.

Andy Goh’s academic track record consists of five community college courses around North County, including art history which plays into one of his main extracurriculars.

“Academic League. Quiz games, crosswords and frankly Reddit sometimes all help me learn the trivia that I find so interesting, and quite ironically it also helps me take my mind off of school for a bit, even if some might say it’s academic.”

Other than Academic League, Goh has been playing the violin for nine years and the piano for three years.

For college, Goh will be attending UCLA.

“I plan on majoring in math and/or computer science, and as for the career field, I’m not exactly sure as those majors offer many different pathways. I am excited for and curious about what the next four years will bring.”

All three, in spite of their differences, see these titles as a great honor and say that the most helpful things in getting here were hard work, determination and support from friends.

“In a basic sense, [it took] a lot of effort,” Goh said, “Whether it be keeping myself awake for just a bit longer to study key terms, or having long and frustrating conversations with friends to figure out a chemistry concept, the effort was always there. But I also owe it to said friends that were always willing to help me out, to the teachers who would thoroughly answer my questions, and of course, to my parents who have always supported me to be my best.”