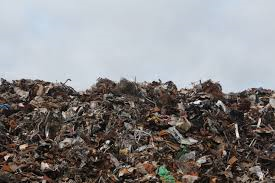 Mountains of trash piled up due to American consumerism. Recently, countries around the globe have scrambled to figure out a way to discard their trash.

For most people, the issue of garbage ends at the recycling bin or the trash can with little concern about how it is disposed of.

But in recent years as landfills begin to overflow, countries around the globe scrambled to figure out a way to discard their trash. Up until 2017, China was one of the largest receivers of the world’s waste. Exported trash was sorted and turned into other consumer products but the issue lies with health and safety.

The by-products and dangerous process required to sort international garbage contaminated the land and water in many Chinese towns. To combat this, China passed the National Sword policy that bans China from accepting any non-domestic recycling, resulting in many countries around the world racing to propose a plan for how to deal with the extensive amounts of trash and recycling increasing due to the growth of technological innovations and consumerism.

The United States, Germany and Japan have struggled to find a way to dispose of all the trash produced and as the landfills fill up the question of how these countries will domestically process tons of plastics becomes an imperative concern.

In Carlsbad, our waste is picked up on a regular basis by the local chapter of Waste Management. Waste Management serves 48 states as well as parts of Canada for the disposing of residential, industrial, municipal and commercial garbage.

Since the early 70s, WM has been a leader in using trash as a form for renewable energy. Their Wheelabrator which has “converted over 145 million tons of solid waste into 75 billion kWh of energy” utilizes furnace boilers to combust the waste for an hour and uses the steam to drive turbine generators which in turn creates energy.

At the WM Materials Recycling Facility, state of the art machinery sorts recyclables, and with the main focus of reducing contamination the sorted recycling is then “sold to end markets to make new products” explained Lori Somers from Waste Management Carlsbad.

While across the globe, China is addressing their waste concerns by hiring some unlikely employees to consume their trash: cockroaches. A facility in Jinan, China contracts 1 billion cockroaches that eat an average of 50 tons of food waste daily. Their seemingly bottomless appetites make them a great resource when considering ways to dispose of food waste. According to the LA Times in 2013 there were 100 cockroach farms and the number is likely to have grown in the coming years.

In an article posted by Inside Edition, chairwoman of Shandong Qiaobin Agricultural Technology Co (where the cockroaches are housed), Li Hongyi discussed how ‘“ it’s like turning rubbish into commodities,”’ boasting about its environmental benefits as the cockroaches are reused in “beauty mask, diet pills and even hair loss treatments.”

With over 13,000 landfills, according to the Environmental Protection Agency, the United States’ trash production is only increasing and the problem is affecting more than just those involved in the disposal process.

A recent viral trend has been gaining traction with the purpose of cleaning up our world. Teens from across the globe are taking part in the #trashtag where they travel to local makeshift landfills to partake in some environmental good. Posting before and after photos comparing the progress is part of the challenge. On social media platforms Instagram and Twitter, the hashtag has cultivated over 86,000 posts.

“[Environmental club’s mission is to] spread awareness about environmental issues and… enact environmental change through the Bobcat community…[and to be] the active change to combat climate change,” Low explained.

One of the club’s main projects was advocating to install a water bottle refilling station to provide all bobcats the opportunity to reuse and reduce.

Environmental concerns have been at the center of many political debates and foreign conferences; so whether your contribution is incinerating trash, eating excess food waste like cockroaches, cleaning up trash infested locations for the trash tag or just simply using refillable water bottles, every action that reduces waste, reuses current products or recycles plastics is a contribution to eliminating our increasing consumerist footprint.