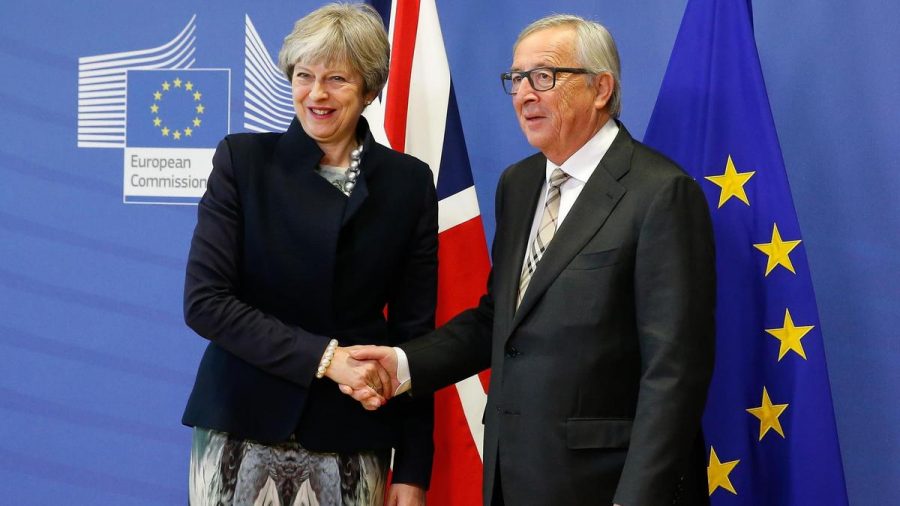 Photo taken from The National

Theresa May, British Prime Minister, has been in charge of negotiations with the EU, led by Jean-Claude Juncker seen to the right, for the past two years. Her plan, agreed upon by all members of the EU, has been having quite a bit of trouble back at home however.

Brexit, or the British exit of the European Union (EU), has been dragging along for two years since the initial referendum in June of 2016. Since the vote, the UK has been in political discord, with one party claiming the exit deal isn’t hard (this term will be talked on in a bit) enough, and the other fighting to not leave at all.

Brexit has been a major political move, fueled by UK politician Boris Johnson and the UK Independence Party, or UKIP. Proponents for Brexit claim that it will allow them more freedom within Europe and control where they send money that would go to the EU.

However, the tradeoffs, opposition says, are much too great a price to pay, and the EU knows this. The incredibly complex bureaucratic organization is using Brexit and the confusion it has caused to dismay other members from leaving; imposing harsh agreements and making negotiations as difficult as possible.

This mess of politics all began June 23 of 2016 when the UK government passed the decision to leave onto the people. Many, confused by the politics, did not understand the concept, and either did not vote or voted with an uneducated stance, sentiments found on British television, online forums and search habits.

In fact, Google analytics show that a gargantuan spike of searches saying “what is the EU” took place the day after the vote was revealed to have passed in favor, meaning many voters made their decision without fully understanding the consequences. The vote came out to 51.89 percent to 48.11 percent in favor of leaving the EU.

Since the vote happened, Prime Minister Theresa May has been working to make a deal plan with the EU regulating everything about the interactions between the organization and the UK.

The plan that May came up with, after spending two years in negotiations, the deal went to Parliament, in which it received the worst vote in UK history: 202 for the deal to 432 against it.

May, widely unpopular, even said she would trade her job for the deal getting passed, but parliament chose what they considered the lesser of two evils, keeping the Prime Minister where she is.

Currently, the EU negotiates trade deals as one bloc and allows for rapid buying, selling and transfer of EU goods within other EU countries. Leaving the single market system would draw distinct lines between the UK and the EU in terms of trade.

A breakdown of a soft vs. hard Brexit is as follows:

Remain single market
EU nationals could freely enter and leave the country
Britain’s exports would not be subject to border checks
No border patrol stations between EU and UK borders, including all ports and land borders.

The other option for leaving, the worst-case scenario, is the no deal plan or cliff edge. This is the case in which the UK leaves the EU before ratifying the deal agreement that May made. In this scenario, everything would default to the harshest possible scenario in terms of relations between the EU and the UK, destabilizing the entire nation; which is why the exit deal getting a record shutdown in parliament is truly terrifying.

Thankfully the EU has been very lenient with the UK in terms of time, adding several extensions to the deadline of leaving. This is a sign that the EU might be open to the UK ditching the Brexit plan entirely; which is entirely allowed.

Although highly unlikely, the British government could open a second vote to the public on whether or not to leave, but even this contains problems and questions: would it be a second leave or stay, would it be left under PM May’s deal or a new deal entirely?

With how unlikely this is for the nation, however, many are prepping for the leave. The British government even released hundreds of documents on what to do should the UK leave with no deal, before the extensions were passed, and the impact would not go unnoticed.

England and the rest of the UK would take the brunt of the impact, ramifications would be felt worldwide, even in your own spending here in Carlsbad.

Eight different European based economic advisory boards have said Brexit will have a large negative impact on the British economy, but as the UK is often the point of entry to Europe as a whole for American investors, executives and companies, the difficulty in shifting between what will become two different chunks of Europe will be quite tremendous.

These newfound difficulties, in conjunction with economic preparations aimed towards the difficulties between the U.S. and China, leads to a big impact on American based and American traded companies.

This means that name-brand goods sold here in the U.S. could see small price increases in order to counteract newly discovered losses within these companies. Even more, niche organizations that work with the EU and the UK would face major complications in continuing trade.

With the recent extension on part of the EU to October 31, things might not be as bad as they seem but only time will tell as May continues to work with members of the opposition in hopes to pass the deal she has written.

If the deal is passed, the lesser of two pains is taken; if the government and/or the people decide to stay, normality could return to the European Union and the European single market.