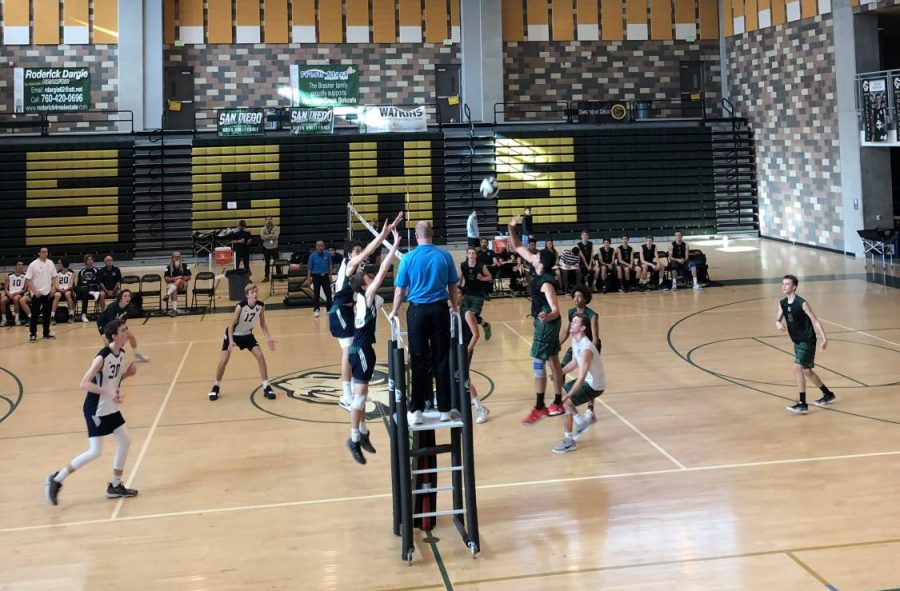 Sage Creek rallies the ball back and forth before hitting it over the net. On Friday, March 22, boys volleyball competed against La Costa Canyon winning 3-0.

With a well-rounded varsity team, a triumphant junior varsity team and two-spirited freshmen teams on deck, the boys volleyball program here at Sage Creek is full steam ahead for this upcoming season.

After a successful season last year, they are currently placed within the top 40 boys volleyball programs in the nation. The team is professional when it comes to pressure and high expectations.

“Sometimes you get caught up in these nerve-racking situations [but the key is to] go back and see some of your players serve and [you think] no matter what happens, I got their back,” Coach David Savage said.

Coach Savage has aimed to extend unconditional love and support to his team, encouraging them to go out there and do the best that they can.

“I really care about these guys whether we win or lose,” Savage emphasized, “and I’m going to do everything I can possibly do to ensure that victory.”

Senior and team captain TC Cook has been a member of boys varsity volleyball for a few years describes Coach Savage as an “experienced and inspiring leader.”

Cook also recalls how the team has grown this year.

“This year, our team has five seniors, and we all pretty much have equal leadership,” Cook said, “We all run the team pretty well.”

Cook and junior Matthew Oakley are committed to playing Division 1 Volleyball at the University of Loyola Chicago.

“I’ve thought about playing pro because there’s a ton of pro leagues in Europe. In reality, it’s not that hard to play pro, but the thing is, they don’t make that much money, so I’ll have to decide later on if that’s a route I want to take,” TC said.

Matthew Oakley is one of two kids in the country committed which is a huge achievement for him.

“I just wasn’t expecting [the commitment to LUC] to come so fast,” Oakley said.

While it seems like Oakley’s entire life is focused upon volleyball, his academic plans for college consist of majoring in chemistry, in addition to minoring in business.

In the meantime, Oakley intends on being there for the freshman, and “help[ing] them love the game like he does.”