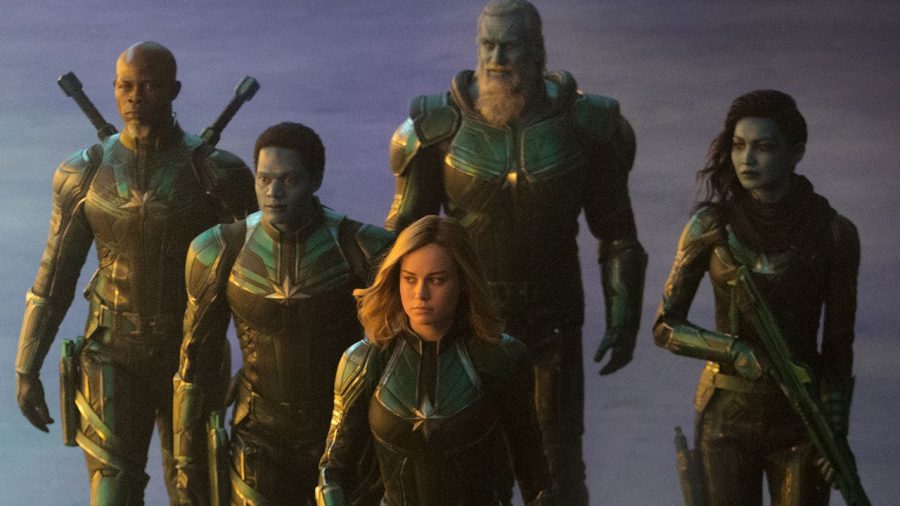 Brie Larson portrays the true hero of the movie, Carol Danvers. She starts the story as part of the Kree Starforce but later takes the opposing side of the skrulls.

Disclaimer: This article in its analysis of the movie contains spoilers of the plot, so if you plan on seeing it, perhaps wait to read this article until afterward.

This year’s smash hit of “Captain Marvel” is not only breaking records, passing fan favorite “Spiderman: Homecoming” in sales, but also stereotypes, as its main protagonist, Carol Danvers, is a woman.

A female hero lead role is a first for the organization Marvel Studios, and with how well it is doing, more female-centric movies are sure to roll out soon —  a well overdue turn. This change matches in well with the views of the late creator of the organization, Stan Lee: a man who called for social justice and equality within his comics and often embedded political themes in movies.

“I always tried to write stuff that would be for everybody. I never wanted to proselytize,” Lee said in an interview with The Times of Israel. Lee also gave, then character Sergeant— not Colonel— Fury “A full international platoon of all religions and people said, ‘oh, you can’t do that, Stan, the book won’t sell down south, or up north, or here or there.’ And it was one of the best selling books, which shows there’s something good about the public.”

Lee’s call for equality and representation extends into this newest blockbuster as well and not just in women’s representation. In the film, the Kree Starforce is originally established as our hero, saving the world from the invasion of the Skrull race, shapeshifters who infiltrate planets and take them over.

However, as the story progresses, we learn that not only are the Kree not the benevolent savers of their world as we have come to know, but slaughter the Skrulls who are simply running from persecution and looking for a new home. We see scenes of the Skrulls playing pinball and chatting with friends and family. They aren’t infesting planets for the sake of harming the Kree, they are trying to flee the terrors that plagued where they came from, a story that resonates with many in our current world.

If you’re missing the connection, the Skrulls are immigrants. Captain Marvel isn’t only a partial triumph for women’s representation as hero and leader but is also a call to end the demonizing rhetoric and alienation of immigrants by American right-wing media.

Our true hero Carol Danvers is representative of the American population, even saying at one point in the film that she and the U.S. Air Force are a team and taking on the colors of the organization: red, blue and gold. Danvers realizes that she has been lied to and swayed by the rhetoric of the Kree Starforce, the intergalactic army and police of the Kree “Empire,” and A.I. Leader of the Kree, The Supreme Intelligence. This same militaristic rhetoric can be seen in descriptions of the migrant caravan that approached the U.S.-Mexican border just this past year.

Our president called them “animals” and “terrorists.” He said that them coming was an “invasion” and was putting our way of life under siege. The antagonist Kree population says the exact same things about the Skrulls. Who we then learn are fleeing unjust persecution after the destruction of their home by the very people who are calling them ‘invaders.’

This parallel, despite what many don’t know, remains true for U.S. intervention in Latin America. Ever since Theodore Roosevelt claimed the United States as the “international police” in 1904; U.S.-backed coups, one-side-dependent agreements, and resource-sapping have played instrumental roles in the creation of the negatives that many are fleeing. The U.S. has backed six military coups and support six harsh dictatorships in Latin America. While not nearly as bad as blasting a planet out of the sky, the connection is clear as day.

The central conceit of the show is a clearly drawn correlation between the Skrulls and immigrants to the U.S. Marvel Studios and Stan Lee are asking us to look past the rhetoric that is broadcast to us, that is being forced (quite literally in the case for Danvers) upon us, and see the true character of a people. Not as a collective, but as individuals with specific reasonings and needs.

Lee shows us and pleads for a vision of not only the U.S. but the earth as a whole, as a place for all people to be treated equally and with respect. And this world is one we should be striving towards.

Of course, we will never be able to fly around quite like Ms. Danvers, but soaring above the rhetoric and politics on this issue is exactly what needs to be done. Focusing less on the politics of the matter and putting the stories on display of each person heading to this ‘shining city on the hill,’ will help bring us, as a nation, to a better approach to deal with the immigration issue.

It will show ways to balance helping others and protecting our own in a humane way, not just locking them away, or separating families as a ‘deterrent’ to others in a land where people of all kinds and creeds are supposed to be welcome.