Toss-up: What is Academic League? 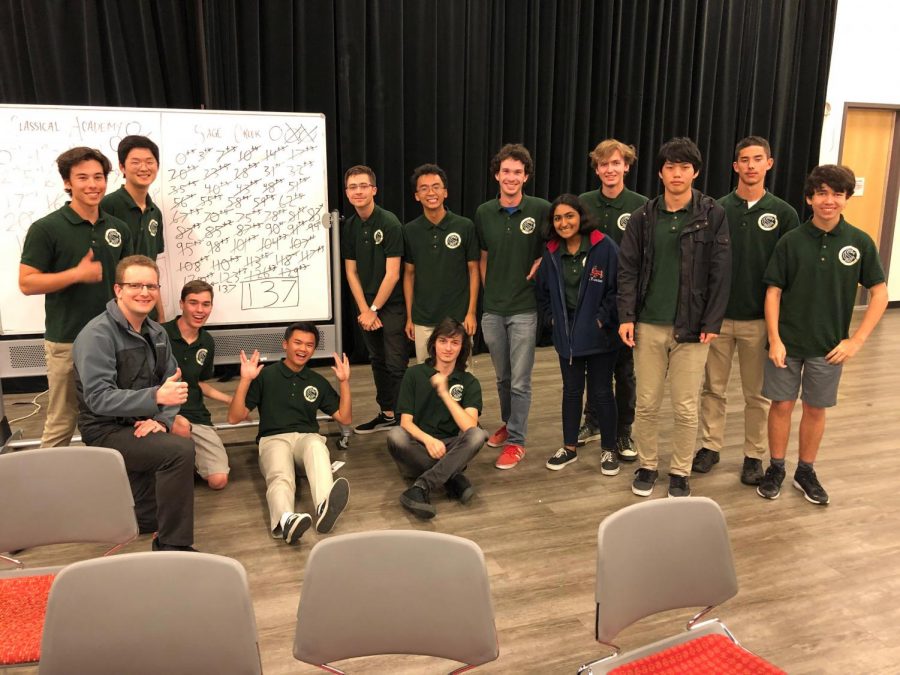 The team poses after winning their play-in match to participate in the championship tournament. The 137 score on the whiteboard not only marks the win of the match, but the highest score in the teams history.

Ten seconds left on the clock. It’s anyone’s game as Sage Creek goes against Carlsbad. Sage acts fast to seal the win. Three seconds left and the crowd erupts as Sage beats Carlsbad 84 to 71. It isn’t a basketball game, far from it actually. It’s Academic League, the academic team question-and-answer knowledge bowl where matches are dedicated to the demonstration of educational achievement, scholastic excellence and academic competition.

North County Academic League started in 1983 with 12 teams and two different leagues but has grown quite a bit since then with 28 schools and four leagues participating in the 2018-19 season. Each school puts forth a varsity, JV and freshman team to compete head to head. The game is basically team Jeopardy against other schools with toss-up, anyone’s guess and bonus team specific questions.

This year marks the best yet in the club’s five-year history, with a number of firsts. The JV team ended the season in first, winning all of their matches, and will be participating in championship matches. The varsity team also did very well, ending with a 5-1-0 record, the highest yet; tieing with Carlsbad High School and La Costa Canyon High School for first place in the overall league, a first for the team; beating Carlsbad 84-71 in the match against them this season, another first for the team; qualifying for playoffs, yet another first for the team; and will be competing in the championship against the best teams from all over North County, the final first for the varsity team.

“This year is the first time that our team made it to the championships, and we are beyond excited about it,” said Andy Goh, one of the varsity teams players, “After winning our match to get us in the championship bracket by a margin of around one hundred points, we are pretty pumped to continue on in the bracket with our best foot forward. As this is my last year in Academic League I personally am very proud of how far we’ve come, especially since I know how hard our team has worked to get to this point.”

With the championship day set for May 6, the team has upped its game in order to do their best. Before March 21, the team had informal lunchtime meetings in coach Sr. Karmar’s room using old questions from similar competitions (such as “One character compares the protagonist to Icarus after discovering contraband materials in his house. Bombers are a constant presence during this novel, which culminates in a massive nuclear strike on the protagonist’s unnamed city” with the answer of Fahrenheit 451), but now the team has a different approach according to club president, Kenneth Nguyen.

“So now we do practices every day with each day having a different focus like math or capital cities or famous authors. In addition to this, we have also been discussing different strategies like what lineups to use, how to buzz in halfway to get a jump on the opponent, and when to stall time. We also assigned Quizlets to each member for them to become more familiar with a specific area of study,” Nguyen said.

Team practices aren’t the only thing evolving. Members Ben Hartley and Joseph Fox talk about how the team spirit, although more competitive, remains as light-hearted and friendly as ever.

“I’ve been on the team for three years. Since freshman year its become a lot more competitive. In the beginning, it was just a group of friends who just got together and joined and we thought it was fun and we would make jokes when we were up at the freshman team competitions and we would answer the questions we knew, but wouldn’t take it too seriously,” Hartley said, “And now that we’ve been doing a lot better we are getting really into it and making sure we have a strategy for each match. So like we’ll group people together that know a variety of subjects as opposed to just randomly assigning seats, that way we have better chances of winning and have more fun.”

Fox also notes how, “the jokes have evolved. As we learned more we make better stupid jokes. And then we also know each other a lot better than we did last year and we’ve all made more inside jokes. So Joke evolution, Darwin says.”

With team morale as high as the hopes are for championships, the team continues to practice their hardest and work to earn Sage a seat in the semifinals and possibly even finals of the competition.