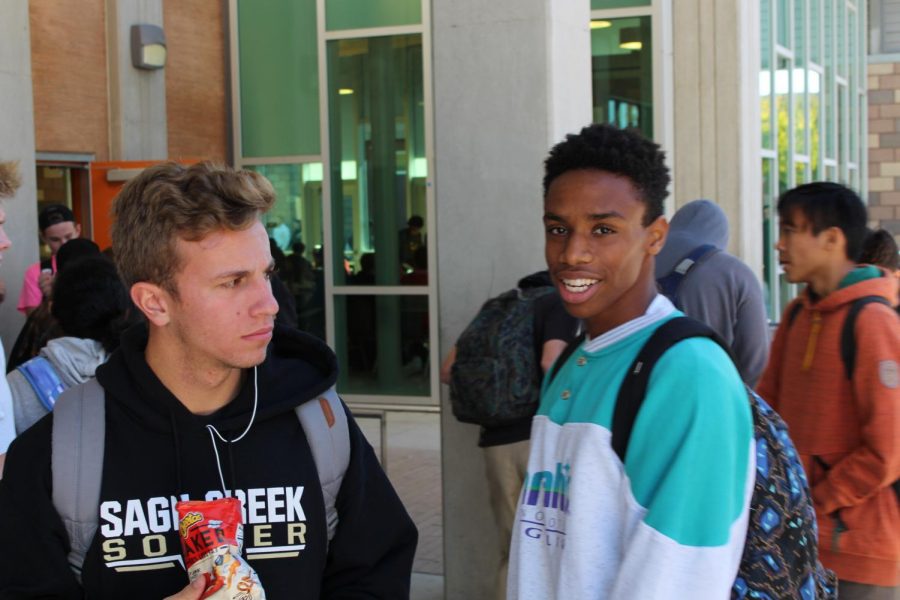 Titus Washington and Jet Trask wait in line to buy lunch. Both Washington and Trask are going to play collegiate soccer at Sacramento State University in the Fall.

Two boys argue over a section on the common application. A girl frantically asks a counselor about her letter of recommendation. Fingers fly furiously across computer keyboards as students utilize the last minutes of college workshop time. However, not all students are affected by this madness. Titus Washington sits back and watches, already committed to Sacramento State University to play D1 soccer.

Washington was born and raised in the city of Carlsbad, where he attended Valley Middle School before joining the Sage Creek community. As a child, Washington discovered his passion for soccer, which has been a constant extracurricular on his schedule throughout his academic career. Playing for competitive teams such as Wave FC, San Diego Surf and LA Galaxy San Diego, Washington has enjoyed soccer’s positive impact on his daily life.

“I’ve been playing soccer since I was nine years old,” Washington states, “I have a very set schedule, and if I don’t have a set schedule, then I can’t complete certain things. Soccer helps with that. I have things to do instead of procrastinating.”

Washington’s hard work has paid off, as he committed to playing D1 soccer at Sacramento State with fellow senior, Jet Trask, earlier this year, where he plans to major in business and marketing.

“I’m looking forward to joining the program and making an impact,” Washington remarks, before adding, “My main goal in college soccer is to join the 20/20 club, which is where all four years of college I score 20 goals and 20 assists.”

Washington isn’t the only one excited about his future.

“I think it’s great. There’s something very special about being able to play a D1 collegiate sport, and I’m very excited for him. He’s going to have an amazing time,” Cori Leighton says, the Sage Creek athletic director that has watched Titus grow as an athlete throughout his high school career.

“Titus— he’s a competitor,” Leighton explains, “It’s just who he is, it’s what drives him, and in the classroom and on the field, he always wants to be better than the day before. He has an edge where he wants to constantly get better, and when someone has that attitude of constantly improving, you’re going to see that they’re moving along quickly.”

Off the field, Washington excels in other areas— as a brother, friend and hard worker.

“Titus is competitive, dedicated, and a well-rounded person,” Eli Washington, younger brother to Titus and a freshman at Sage Creek, says, “He’s always trying to motivate people, and whenever I have something big going on, he’s always there trying to help me get prepared for it.”

Whether it’s being a good friend or brother, working hard on the field, in the classroom, or even as an employee at House of Air in Bressi Ranch (a trampoline park), Washington seems to make time for it all. His “can-do” attitude inspires many, and when asked how other students can learn from Washington, Leighton had one last sentiment.

“Again, Titus has an edge, and that attitude means everything. If you feel like you don’t have that edge, find it. You can see how it translates on the field and in the classroom.”

With a competitive spirit like his, Washington has made a name for himself at Sage Creek High School and is sure to do it again now that he’s committed to Sacramento State. After considering the years of hard work Washington has poured into his sport, his brother Eli summed it up well, simply saying, “I feel like he’s earned it.”