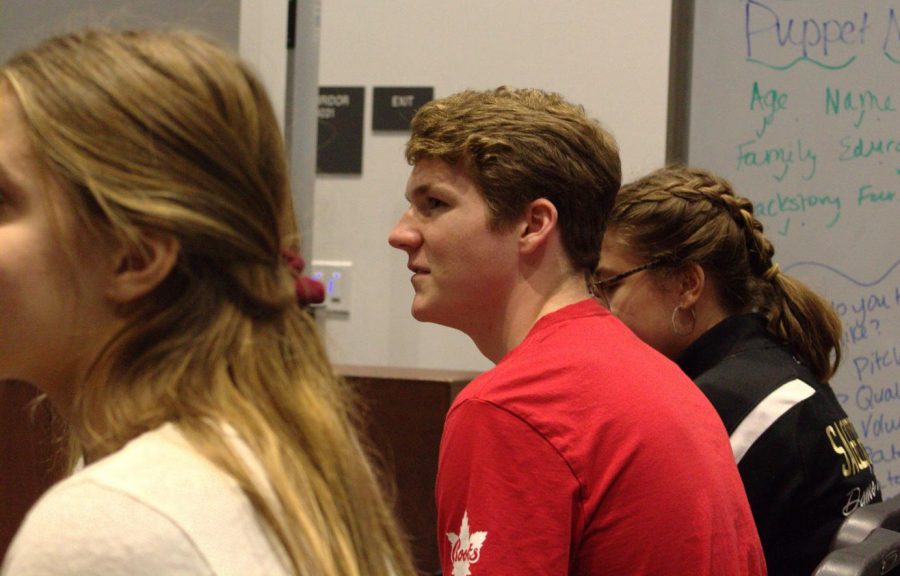 Villeneuve listens to Mrs.Porter-Eshelman as she announces what the class will be doing next. This is Villeneuve's fourth year in Sage Creek’s theater class.

If you are backstage with Senior Tristan Villeneuve before a show, you might hear him tell himself, “I am in no physical danger.” Every actor has a way to calm their nerves before a performance, however, Villeneuve’s is just as original as he is.

Villeneuve lives and breathes theater, and as his days at Sage Creek’s theater program are numbered, that does not mean he will discontinue his acting career. College is often looked at as a daunting and stressful time for seniors, Villeneuve, however, has his eyes on the prize.

For some students, theater may seem like an elective that you have to take to graduate, however for Villeneuve it is not.

“I started young, so it just kinda became normal,” Villeneuve says, “I want to major in acting, and criminal justice too, just as a backup though.”

Senior Avalon Call has only worked with Villeneuve for two years and knows how passionate he is for the arts.

“He really wants to do this for the rest of his life,” Call says, “It’s really nice to work with someone who takes the craft very seriously.”

Over the last two years, Call has worked very closely with Villeneuve and has been inspired by his dedication.

“I wasn’t a theater kid before last year, but Tristan turned me into one,” Call laughs as she returns to rehearsal.

Villeneuve is not only an actor but also a passionate director. Senior Ryan Harazim along with other seniors in this years theater three class put on a senior directing showcase on Jan. 24, where they directed and performed a scene in the PAC.

“He’s a very good director from what I’ve seen,” Harazim says, “He’s very organized and he doesn’t slack around.”

Harazim has been performing with Villeneuve since his freshman year where they first debuted in “Guys and Dolls” at the CAC.

Harazim starred in Les Miserables along with Villeneuve this past week. This is the fourth year in a row that Harazim and Villeneuve will be performing in a Sage Creek musical.

Although Villeneuve, along with other seniors who have been with Sage Creek’s theater program since their freshman year, will be leaving soon, their legacy will continue on as the program continues to grow.

“I am excited to leave… not because I don’t like this place, but I’m ready to move on, and see how this place continues to give students like me a place to be themselves.”