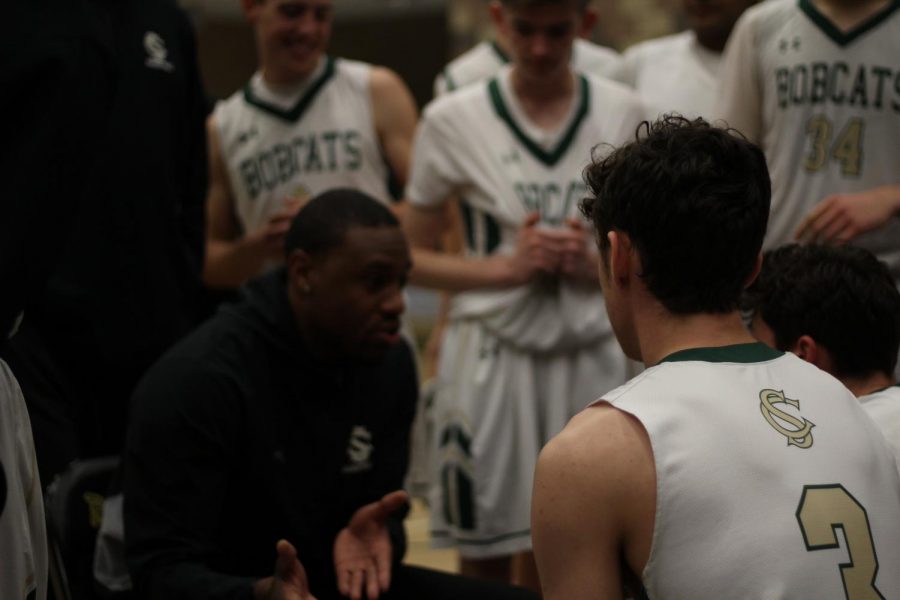 Head coach Brandon Dowdy is telling the game plan for the next quarter. The Bobcats took a huge scoring drive prior to the time out.

That’s what Senior Braden Brasher said. Though it was not a comment on the rainy weather that Carlsbad has been experiencing lately; rather a description on Dalton Miller’s performance during the boys basketball CIF home match.

The varsity team played tenth seed Madison High School Wednesday for the first round of CIF playoffs. Even though they were the seeded sixth for division three, others were skeptical going into the game.

“A lot of guys who do analysis on our games picked [Madison] to win,” captain junior Nick Naccarato said.

Naccarato started the game as the point guard for the team as the Bobcats took victory over the Warhawks 68 – 48. Sage Creek controlled the match from the get-go, preventing Madison from outscoring them in any quarter. Miller led the team with 18 points, shooting 78 percent from the field.

“It’s one and done so we needed to win, and we got the job done and won,” Miller said.

The team took advantage of the defensive miscues by Madison and capitalized with a field goal percentage of 55 percent. Among other scoring leaders, Jamie Ellenstein had 14, Nick Sonck had 11 and Matthew Korf with 8.

A key factor in the win were the three-point shots. A total of eight were put up; four from Miller, two from Korf, and one from Naccarato and sophomore Cedric Jung each.

With the Warhawks behind them, Sage Creek is taking on the Norsemen from Valhalla High School. In previous tournament games, Valhalla came on top, but the Bobcats are looking to take revenge.

“We’re gonna be working on our defense…, getting shots up and staying locked in,” Jung said.

He stated that part of the past loss to Valhalla was the defense collapsing late in the game.

Head coach Brandon Dowdy is entering his fourth CIF playoff run with the team and he is looking to repeat what he did two years ago.

“If we keep our pressure… then we will be fine,” Dowdy said.

Defense is a key aspect for the upcoming game but a more important trait that doesn’t take a physical form is “playing with confidence.” Something that both team captain Naccarato and head coach Dowdy exclaimed.