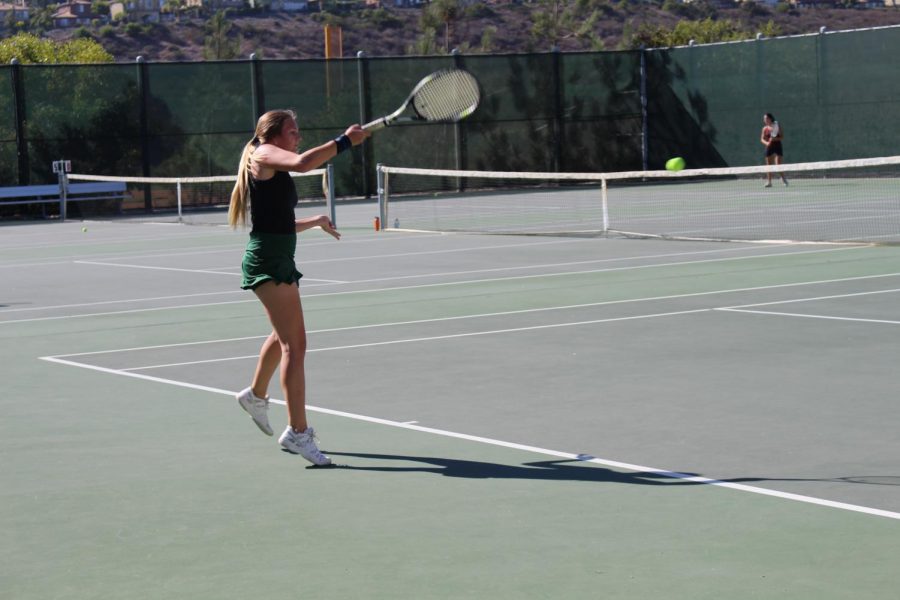 Senior Lindsey Williams takes a quick swing with her racket during the match against RBV.

Girls tennis recently wrapped up their 2018 season. They really seemed to strive throughout the fall as the months progressed with the junior varsity team winning every single league game, along with varsity winning the majority of theirs.

What was your favorite part about this season?

Isabella: “My favorite part about this season was bonding with the girls and our progressive development because our first game was against Carlsbad and we actually lost by two games and we played them again for our last game, and we beat them 14-4 which is a huge difference.”

Faith: “I liked team bonding and when we went to our away games on the bus. We’d jam out to music and everybody always brought snacks.”

Isabella: “I think I first became interested in tennis because my dad was really passionate about it and would play for five to six hours every single day when he was younger. He wanted me to try it out and once I finally did, I realized how much it fits me.”

Faith: “I’m definitely playing next year, cause I loved it, and I started playing at the beginning of this summer.”

How do you think the teams did this season overall?

Isabella: “A lot of the girls drastically improved. In the beginning, it was a bit rocky for JV because not everyone knew how to play doubles. Those who did not have as much experience quickly learned, which lead us to win more games as the season progressed. We won every single league game.”

Faith: “I wasn’t here last season, but I know that last year we did good and we moved up divisions so this year we had good competition and we went undefeated.”

What was your favorite part about this year’s season?

“I enjoyed working with the girls and seeing their great improvement from the beginning of the season. Highlights of the season were wins over traditionally strong tennis programs of Poway and La Costa Canyon.”

How does this season compare to last year’s?

“This year’s team had a tremendous amount of talent and improved in every aspect from improved strokes to match play.”

What is your favorite part about coaching?

“My favorite part of coaching is teaching tennis and seeing improvement over a relatively short period of time.”

How do you think the teams did this season, overall?

“I can’t speak completely for the varsity but they had a good season losing in the first round of the C.I.F. playoffs. The JV team had an excellent season losing just one match, so that looks great for the future of Sage Creek girls tennis. Both teams did great and I would think they would have a chance to win a C.I.F. title in the near future.”