A Pair of Shorts and a Pair of Wins to Match 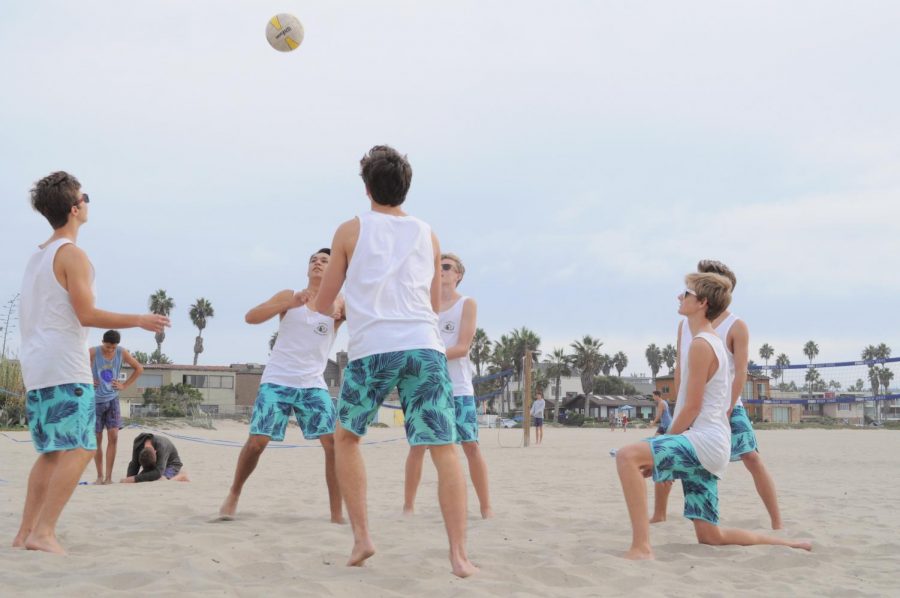 The team is passing the ball for their pregame warm up. Some of the players gathered in a circle, and were stretching, passing and encouraging each other before the game began.

The boys beach volleyball came through with another win against CIF opponents Saint Augustine on Oct. 22. The game took place because of the recent controversy based on the Bobcat team’s mismatched shorts. Coach Mark of Saint Augustine allegedly called the boys beach volleyball commissioner before their previous game expressing their concerns with the uniforms and was supposedly told that it would be seen as a forfeit on Sage Creek’s behalf.

“We figured [the commissioner] called them and told them it was a forfeit,” said Mark with the lack of knowledge that he was supposed to report the uniform violation. It was later confirmed with Sage Creek boys volleyball coach Ryan McDevitt that the Sage Creek team hadn’t received any communication with the commissioner during the game, and many teams had mismatched uniforms as well but the, “dress code” has never been an enforced rule by coaches. Mark also said “that most of the blame goes on their coach” referring to the Bobcats coaches Keaton and Ryan, he said that several emails were sent out regarding the importance of team uniforms. Therefore Sage Creek should’ve already been prepared.

This situation led to the rematch. Both teams came ready to win and fight for a space in the semifinals. Sadly it was observed that as soon as Bobcat players arrived at the beach, several Saints players bashed them with rude comments pertaining to their uniforms. The boys were even pestered during their warmup by a Saints player forcing another round of useless questions upon them. Instead of engaging with them, Bobcat players ignored them and simply kept warming up. This proper behavioral choice was made by the team, and were brought forth by a speech the Sage coaches gave before the match, informing the players they needed to conduct proper behavior no matter the circumstances and they should put their “passion into the game” said Coach Ryan McDevitt.

The game started promptly at 4 p.m.and began with the first three seeds. During their previous match against Saints their 1st, 2nd and 5th seed won, and they were hoping to carry out this tactic in the rematch. The first seed team consisted of Matt Oakley and Taylan Cook. This game was grueling for Sage, and it seemed that the Saints had come out on top. Due to this loss, it was necessary for a different team who had not previously won, to win. The second seed, Garrett Edwards and Scott Anderson won their set with ease, securing the first win for the Bobcats. After these games were finished, the third seed, Cole Younger and David Hosseini were left to play. They had an amazing first set, just barely taking the win and then secured the victory with beautiful sets, and powerful hits that left the other team in dismay. Younger believed that after playing Saints once before, he was able to defeat them this time by “adjusting to the players” Younger said.

Bobcats then entered the second round with two victories, which meant they only needed one more win and had two games to achieve that. A gloomy air filled one side of the posts and a cheerful one filled the other.  The fourth seed victory was taken by Saints and it was once again, all in the hands of the very last seed. This game determining team consisted of Jackson Gilbert and Andrew May who the team prefers to call “Pickle.” The Bobcats started with an overwhelmingly wonderful first set, with the ending score of 10-21. The second set began and the environment became “ecstatic” Coach Ryan McDevitt described.

It was rowdy and contained immense cheering from both sides as if the audience voice could determine the victory. After several panicking minutes, the last point carried out as if it was in slow motion, “Pickle” provided a lofty set, which Gilbert followed with a vigorous, strategic, game-winning point.

The entire Bobcat team flooded the court, tackling each other and gifting each other hugs, high fives, and a flood of screams and cheers. After they celebrated, they cheered for the other team and accepted their victory graciously. The boys advanced to the semifinals against Torrey Pines with a 4-1 win, then went into the finals against Poway. They finished once again with a 4-1 victory and took the Open CIF championship banner. The coaches are extremely proud of the team, and the players are very excited to see how they do next year.