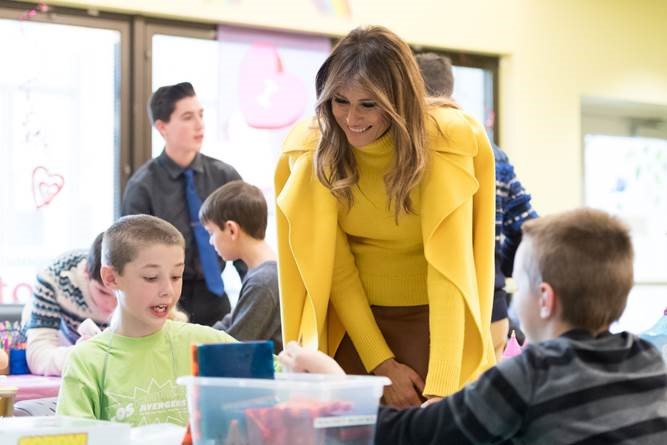 First Lady Melania Trump meets with young children at the Cincinnati Children’s Hospital on Monday, Feb. 5, 2018. Melania has focused her efforts as First Lady in working to discourage bullying on many different platforms, emphasizing its effects on mental and physical stability.

Many American women and girls woke up Saturday, Oct. 6, the day Supreme Court nominee Brett Kavanaugh was confirmed,  unaware of the ramifications to their credibility that would take place only hours preceding. The rights and respect for women in America are equivalent to a big ol’ game of chutes and ladders. For over 50 years, women have been fighting for equality, but the decision to confirm Brett Kavanaugh is a blow to all of the work women have worked so hard to achieve. To us, the children of this country, it is a helpless fight for equality.

This is less about politics; we see it portrayed as a partisan battle of ideology and control of our democracy but to be quite frank this is more than that. As a young woman, I was unable to feel that this debate over whether or not the supreme court nomination Brett Kavanaugh should have been confirmed was not personal. I felt and still feel it is a personal attack on women by Congress. To us, the children of this country, it is our safety.

As the controversy over Brett Kavanaugh heated up many influential figureheads made some surprising and detrimental statements. The comments, tweets and interviews our congressmen and influential figureheads have made are sending a message to us. We, as a country,  have an opportunity to emphasize the importance of respect and integrity, but many have haphazardly sent very harmful messages to our young boys and girls. To us, the children of this country, it is tremendously disrespectful.

“It is a scary time for young men in America…,” President Donald Trump proclaimed after allegations against Supreme Court Justice nomination Brett Kavanaugh were brought up by Christine Blasey Ford after she submitted an anonymous tip to the Washington Post early July 2018. While I can empathize to the fearsome of our young men might feel, I find it unproportional to the fear that the young women in America are subject to. To us, the children of this country, it is a scary time for us all.

I wish I could say I was shocked, to hear President Trump’s comments but I am not, and I definitely am not forgiving of it. I am not sure exactly what he thinks it feels like to be a young woman in America right now, but it is definitely not a secure feeling. By making such a statement, he is sending a message to the young men that their actions at a young age will not have consequences, while too young women, he is saying that the things that happen to young women are irrelevant. No matter the stance you have on Kavanaugh’s worthiness to a Supreme Court seat, these messages from the President of our country are definitely not beneficial. To us, the children of this country, there seems to be a double standard for our actions.

I am saddened by the expectations we have for our adolescence. I have no idea what the point of saying such insensitive things is but regardless of the internet, it is destructive. Where have the days of role models gone? Where have the days of respect gone? As a young woman the happening of the Supreme Court nomination confirmation, I feel qualified to say that is a scary time for children in America when politicians care little to none about our wellbeing and safety. To us, the children of this country, it is our future.