Using Acting to Brighten Up the Lives of Others 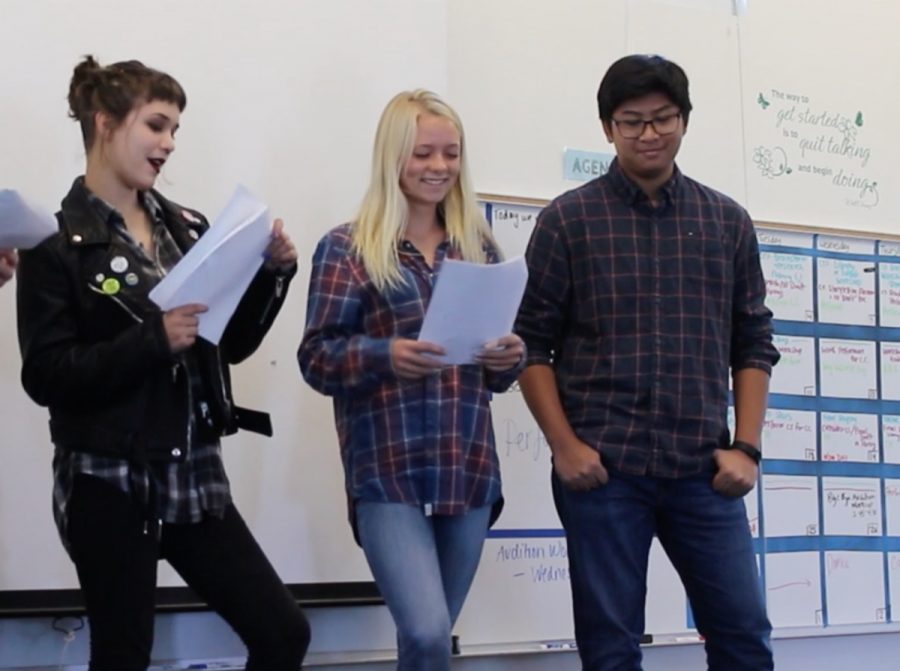 Ashley Chandler in theatre class with her fellow classmates.

Freshman Ashley Chandler shares her story of how she performs in hopes of brightening everyone’s day. While pursuing theatre, she hopes to expand on her knowledge of cosmetology.

Chandler found her passion for cosmetology when she was little, while watching her mom put on makeup.

“It was crazy seeing the transformation it causes, turning one person into one thing into another,” Chandler said.

Amongst other things, she fell in love with being on stage after taking exploratory wheel in sixth grade. Since she has found her passions, she has continued to pursue them Throughout all of Chandler’s performances her favorite scene has been a two-person Shakespeare piece she performed last year in Balboa Park for a festival she competed in.

“I really enjoy doing comedy scenes because I love how light-hearted they are,” Chandler commented.

Chandler doesn’t just love comedy performance, she wants to try all genres of acting, but comedy will always have a special place in her heart.

“I like to expand and try all different types of scenes,” Chandler enthused, “ but I’m mostly into comedy because I am into making the audience laugh, and putting them into a good mood.”

Comedy scenes followed Chandler right to her first project in theatre,  where the students got to choose whatever scene they wanted to do. From the moment they started working on the project, theatre teacher, Jillian Porter could tell that she was going to be an amazing student and actor.

“Ashley has a tremendous work ethic, she was a big group-leader for our first project we did,” Porter explained. “Right from the start she helped direct the group, [while] having a lot of enthusiasm for the project.”

Not only does Porter see Chandler as a fantastic student, but says that she is also a great actor with limitless potential.

“She is very versatile and has a real desire to grow and get better [while] helping others,” Porter concluded. “which [are] all great skills of an actor.”

While Chandler’s theatre teacher sees how passionate of a person she is, her friends do as well. Her close friend, Ben Horn, also finds her to be funny, energetic, and caring.

“I can tell her anything and I don’t have to worry about her judging me,” Horn emphasized.

When asked “what her story is,” and “how she wanted to be remembered,” her answer was more about others than herself.

“That’s kind of a loaded question. I’d like to be remembered as the kind of person who made everyone’s day better and who put a smile on other people’s faces, kind of a burst of energy, a breath of fresh air,” Chandler expressed, “ I want people to know to keep yourself happy and not to focus on the bad things.”