Will “The Detention Room” Take it All this Year? 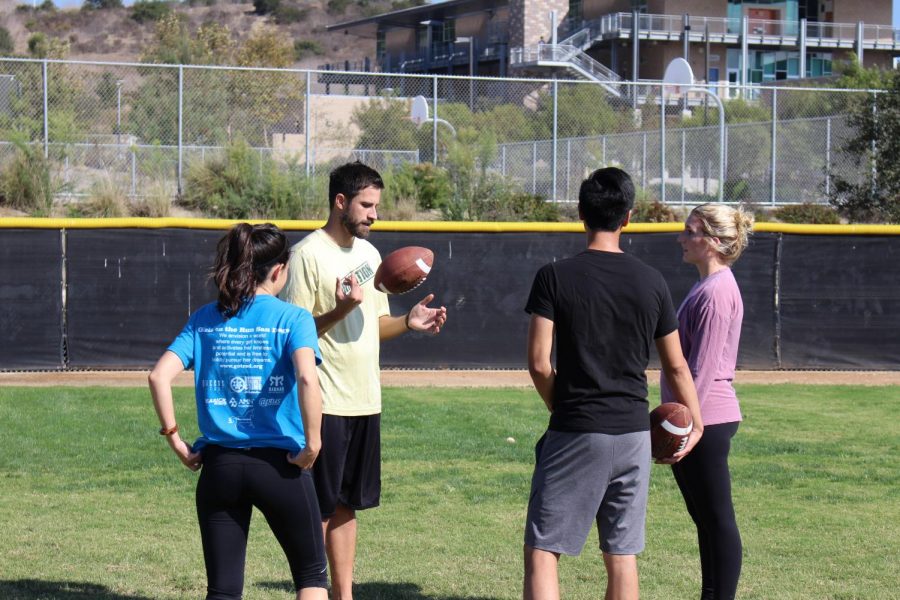 What’s the game plan? English teacher George Porter discusses this year’s plays and overall plans with some of the other teachers. He went over rules and addressed positions being played as well as potential competition. “There are going to be some very tall basketball players that we may end up playing against,” Porter explains.

Last Friday some of the teachers on the staff’s flag football team, “The Detention Room,” took time after school to practice in preparation for the big game this Friday. The teachers in attendance included math teachers, Allison Stock and Madison McLean; English teachers, George Porter and Sarah Hunter; and new to the Sage Creek staff, physics teacher Don Pham and biomedical science teacher Claire Orosco. All of them looking forward to this week’s game.

The teachers began their after-school practice by working on their spirals. As they did this, they discussed some of this year’s plans and how the game might go about.  Later on, disclosing their secret “s-play” and established roles in the game such as who will be the quarterback, running back, etc.

What are you most excited for this year, for the annual flag football game?

“We are excited to see as many students as possible to come out and enjoy the entertainment.  I think that the teachers are looking forward to showing the students a bit of humility in beating them this year,” Porter stated.

Have you ever had any experience playing football before? If so, what was it for?

Pham: “I played for a year in high school.”

Porter: “I played intramural flag football in college.  I think we won a game once.”

What are your thoughts on last year’s flag football game and how do you think your team could improve this year?

“I thought it was great.  I think the teachers improved and it seemed like all of the students were having fun.  I thought the halftime show was phenomenal,” Porter mentioned.

Do you think your team has a good chance of winning this year, and if so why?

Has your team developed any strategies yet?

“Yes, we have a special play called the s-play but we cannot disclose any information on it at this time,” Porter stated.

“I am expecting big things from Mr. Morales because I know he is gonna give it his all this year and leave it all on the field. Besides that, I don’t know if you didn’t witness what just happened out here but these ladies have some arms,” Porter exclaimed!

Make sure to catch this year’s annual Staff vs. Students game this Friday on the field at around 7 pm.